Thank you for stepping in (except for you, Napkin Doon)

Yesterday, I encountered a Twitter troll of the worst kind. It ended up being fun, but just wanted to throw a quick thank you to those of you who came to my defense. Except for Napkin Doon, who tried to feed the troll.

I woke up to a hilarious Twitter reply from someone I had no idea who it was. I had previously simply showed a Kirby Puckett RC I had unearthed in a random box of cards, which was part of a larger lot I recently bought from a local guy. 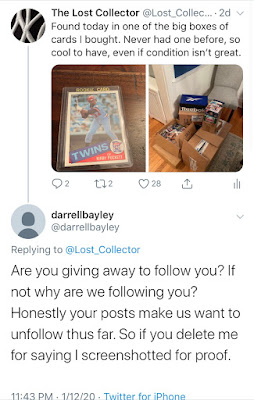 Apparently, unless I am giving this card away, Darrell has no interest in following me. And if I deleted this post, he had taken the measures of screenshotting it so it would live forever.

I came back with a cheeky response that he had in fact won the card, and then he said, "You can keep it. And unfollowed." Oh no! 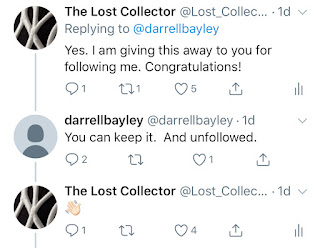 I gave him the simple emoji wave and was done with it, amused for my commute into work. But then you guys all saw the interaction and sprang to life. It was awesome and very amusing. 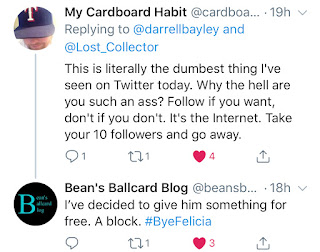 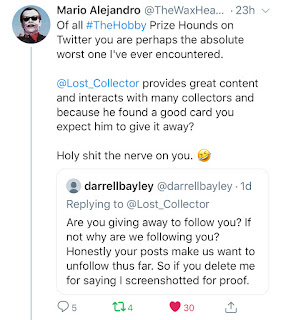 Again, except for you, Napkin Doon. 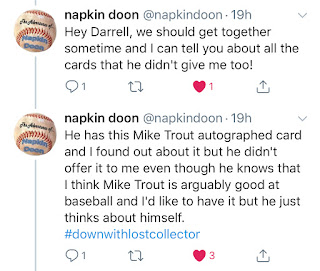 This was some Twitter fun a boring Monday at work, so thanks to everyone for the nice things you said, and for giving Darrell a little piece of your minds.

Except for you, Napkin Doon.
Posted by The Lost Collector at 8:35 AM