Quarantine has seen a bunch of dormant bloggers come back.

One of them is not Coot Veal and the Vealtones run by DHoff...so far! Never say never. But he still resurfaced...via eBay!

I unknowingly bought a card from him, a Tino Martinez 1989 Bowman Tiffany. This card puts me at four Tino's to go to hit 1,000. DHoff hit me with an eBay messaging saying he assumed that this was The Lost Collector, and he was absolutely right. What a fun coincidence! 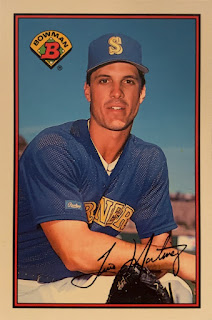 The Tino arrived perfectly, and I certainly trust that it;'s a Tiffany. DHoff wouldn't steer me wrong. The Card is certainly brighter than most 1989 Bowman, a good sign. The gloss level is much higher too. Yep, a Tiffany!

I believe there were only 6,000 of these made, so I'm glad to finally have one.

He also threw in a Jason Giambi, numbered to 999. 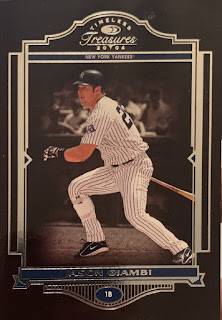 DHoff, nice to see you. Thanks for the sale!
Posted by The Lost Collector at 8:48 PM