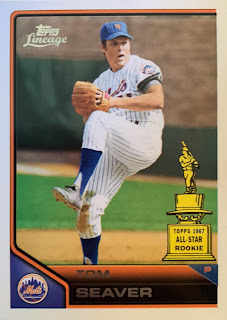 Back in 2011, eleven days before my son was born, I said I was going to collect the 2011 Topps Lineage set as his "birth year" set. My rationale was simple. It was an attractive 200-card set, featuring Hall of Famers, retired players, current (at the time) stars, and a few rookies. It would serve as an education for him, of sorts. Here's how the game looked the year you were born.
Turns out I probably should have collected 2011 Topps Update for him.
It also turns out that I don't set collect, so I probably got about 90% of the way there and never saw it through.
Recently, I had the opportunity to fix that.
Nachos Grande ran a big, bracket style Ultimate Allen & Ginter mini set bracket. Somehow, I ended up with the winning bracket. I really finished second but the winner didn't identify themselves. In full disclosure, I felt a little guilty about winning. I don't like A&G and I sure as heck don't like A&G minis. So I 1. didn't expect to win and 2. felt a bit hesitant to claim my prize as the bracket winner.
However, I didn't just fill out the bracket to be a prize hound. Chris put a lot of work into it, and I appreciate that. He's also been sharing his love for A&G, and specifically A&G minis, since I started blogging. He even has a signed custom mini of himself! I wanted to participate because Chris is a great dude, has always been generous to me, and filling out a bracket is a small thing to support someone I consider to be a hobby friend.
Back to Lineage. So as mentioned, I was crowned champion of picking the winners. I wish I had a method to my madness, but this is definitely like Janice in accounting winning March Madness by blinding picking schools to win. Chris listed some very generous prizes, but one immediately stood out:
A complete set of 2011 Topps Lineage.
Fate! So I jumped at that, and now can say I (cheated) and collected the set for my son. Maybe I'll binder it up for him and stuff it away. But happy to have that one officially done, even if it's nine years later! 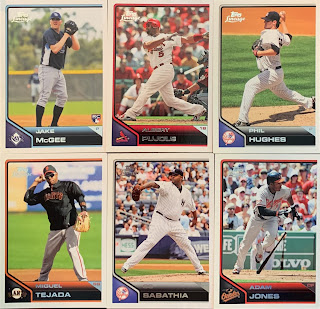 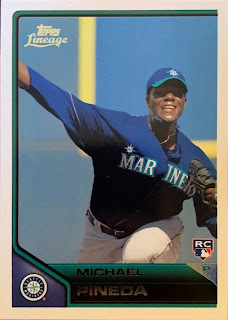 Chris, thanks for the prizes and congrats on successfully running the bracket!
Posted by The Lost Collector at 7:00 AM