Card bloggers are known for establishing relationships and going out of their way to make fellow collectors happy.
While relationships on TCDB are less personal for the most part, I'm starting to see that same generosity flow through.
Two recent occurrences really stood out to me.
I've made a few trades with member kapa64. One trade we were going to make, he couldn't locate one of the cards he was going to send me. Sadly it's happened to me a couple times, so I get it. The card either gets misplaced or TCDB incorrectly marks it as still in your collection after it has changed hands. Usually people are understanding, so of course I was. Not a big deal. It's just baseball cards.
A few weeks later, a PWE from him showed up with the card he couldn't find. It was nice of him to go out of his way to send it when we didn't have a trade in the works. The card is from 2002-03 UD Superstars, a multi-sport set. I haven't seen this Tino often, so really appreciated him sending it after I had written it off. 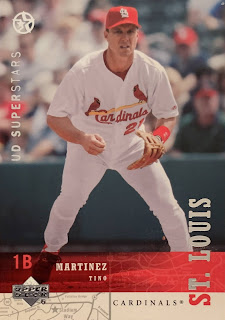 The next was was from Jim aka jimetal7212. He braved a card show recently, and knowing I was THE Tino guy (his words!), grabbed a low-numbered card in hopes I didn't have it. Turns out I did - womp womp - but Jim was kind enough to still send it my way. Look at this beauty! 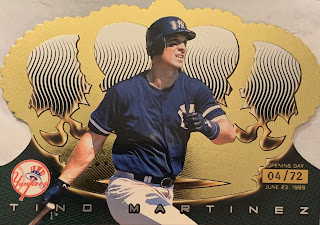 Jim also said he is a regular reader and accesses my blog through TCDB, which I thought was equally cool.
I thank both of these guys for their generosity, and for further proof of why TCDB is awesome.
Posted by The Lost Collector at 9:38 AM