eBay Bucks for the win

With my buying habits, I usually only have a couple dollars of eBay Bucks.
Sometimes I'll play a game and see what I can buy with my $2.31 credit. Other times I'll just apply it to whatever purchase I'm making and save a buck or two.
This past quarter, I had a bit more eBay Bucks than usual, despite the program changing and eBay Bucks becoming rarer. By far the most I've had. I had purchased two Mickey Mantle cards in March, and did so during an additional 5% eBay Bucks promo. So I had some funny money to play with.
Problem is, I don't have a current project or anything on my wantlist that a high priority. I couldn't get a Griffey RC or a Carmelo Anthony autograph. I could have applied the Bucks toward one, I guess. I thought about maybe getting a Tino autograph I didn't have, but I have a lot of Tino autographs and there isn't an apple of my eye.
Instead I turned my attention toward a Derek Jeter card I had been following for quite some time, and snagged this via auction as opposed to BIN: 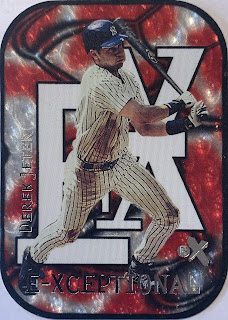 It's such a great looking card from 2000 Fleer/Skybox E-X, part of their insert set called E-Xceptional. These come in red /1999, green /999, and blue /250. While this is the most common of the bunch, it's still not an easy card to come across.
The card itself is diecut, yet symmetrical. The background effect is a little hard to explain. It gives the card a lot of depth. I was expecting more of a flat foil from scans, but it's quite different in person.
I still don't fully know why this was the card I settled on, but in the end, I'm happy with my decision. I just wish eBay Bucks were still a regular thing, and not a special promotion.
Posted by The Lost Collector at 7:44 AM