Cards are crazy right now.
We all know that. The day trading that's going on is insane. Guy who has been meddling in the Majors gets off to a hot start, and his RCs go high. I've parted with several Tyler Naquin RCs over the past week for $3-5 each, and don't feel like for a second "maybe I should have held because he's going to be a star." Nice story of a 29-year-old who had a good first few weeks of the season. Nothing more.
Beyond low-end stuff like that, cards from the non-core sports are also in a similar state. When Hideki Matsuyama won The Masters, I was sad to see I didn't own an SI for Kids card of him (he doesn't have one), since those have been a go-to source for taking advantage of the topicality of an event.
I've mentioned a few times that I still hold a Sports Illustrated for Kids magazine subscription. A few years back I booked a flight on an airline I didn't often use, and accumulated a few frequent flyer miles. Since then, I've been exchanging these miles for an SI for Kids subscription. I do it strictly for the cards.
I always hand off the magazine to my son in hopes he might flip through. But he never does. Kids don't care about magazines or pro sports.
Regardless, the cards are interesting because they feature a wide-range of subjects, from pro sports to olympic sports to college sports to extreme sports to motor sports. The oldies can be quite valuable, such as the 1997 Tiger Woods. Iconic, even.
One card that spiked in value in my possession was the Naomi Osaka 2018 edition, considered by many to be her rookie card. She's a terrific talent and excellent ambassador to the sport. But when she won the Aussie Open again, I immediately listed the card on eBay for $749.99...and sold it in a matter if hours. $750 for an SI for Kids card of a tennis player. Laugh out loud.
The card has now settled in the $200-$300 range, and will probably spike again after her next Grand Slam title...probably some time this year. Maybe the card will be worth thousands down the road, but I didn't blink twice. It's nothing against her. She's incredible and I'm sure has many more Grand Slam titles in her. She's a role model for many young fans. But a tennis card sitting a box of other perforated SI for Kids cards really didn't mean anything to me.
After eBay got their astronomical cut, I had a bit of funny money to play. Most of my surplus goes into the stock market these days, but I decided I'd treat myself here. I considered buying new golf clubs, but ultimately chose to put a portion of it back into cards. Napkin Doon kept pressuring me not to back out and to buy something card-related. Peer pressure at it's highest form.
Without a want list or a current project I'm working on, I decided I couldn't go wrong with a few Mickey Mantles. So for one SI for Kids card, I bought these two Mickey Mantle cards, and had a nice chunk leftover after the fact: 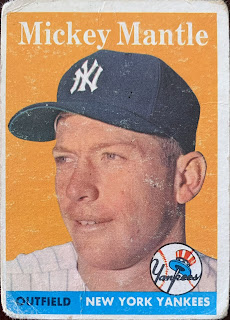 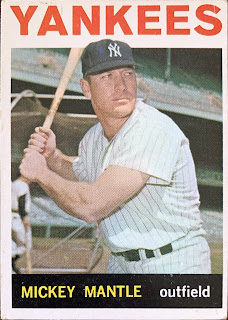 1958 and 1964. I think many of us would make that swap any day. A card that came in a magazine for free and sat in another pile of cards ended up netting me two vintage Mantles.
There was no real reason I chose the two I did. I liked the look of them. It boiled down to that. These will immediately go into my "honey if I die unexpectedly just focus on this box of cards" box.
All that for a 2018 Sports Illustrated for Kids tennis card.
What a world.
Posted by The Lost Collector at 8:00 PM