He was even a machine back then

One of my favorite This Is SportsCenter spots features Albert Pujols and his nickname "The Machine."
Albert has gotten lost a little bit in LA. Ironically, he left St. Louis for LA for more exposure. While still very productive, it's safe to say he hasn't replicated the success he had in St. Louis. Plus, the team has been mostly bad, and he just hasn't been as front and center as he was with the Cardinals. He still managed to hit 31 HRs and drive in 119 runs last year, but he isn't the feared bat that he was prior to signing his big deal.

Still, he currently sits just 4 HRs shy of 600. When the Hall calls, and it will, he'll certainly go in as a Cardinal.

I won this card in a mini contest held by Collecting Cutch. I feel bad. We had to guess how many hits McCutchen would have that night. I was a jerk and guessed zero. And I won. Ick. 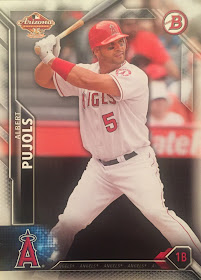 The card is pretty cool - an Arizona Fall League 5x7. I agree with Brian that it would have been better if the player was in his AFL uniform. The best part is that his 2000 Fall League stats are on the back. Unsurprisingly, he hit .323 with 4 HRs...as a 20 year old. 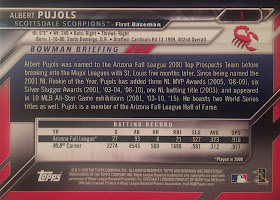 Brian was kind enough to throw in this AWESOME Dellin Betances All-Star card. I have never seen this! I believe it's from the All-Star parade. Very cool. No idea where or how this set was released. 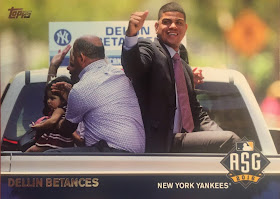 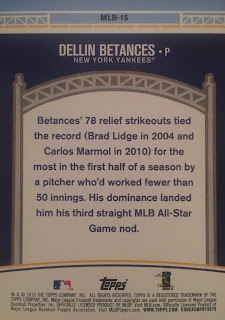 Thanks Brian...and I swear I'm going to join your big contest. So should all of you - ENTER HERE.