I crossed the 1,000 Tino Martinez unique card number! I've been counting down to this number for quite some time. I even planned to maybe sit on 999 and then splurge for something really out there.

But it didn't go that way, because when does anything ever go the way you plan?

The way I actually hit 1,000 was better than what I would have planned myself. It was a way in which many of my cards have come to me: through a generous act of kindness from a card blogger.

I was at 998 when a PWE full of Tino Martinez cards came in from Bob at The Best Bubble. Upon flipping through, I thought I had them all and these would go in my Tino dupes.

But on closer inspection, there were in fact exactly two cards I needed. At that put me at a cool 1,000!

Card 999 was a blue showdown parallel from 2005 Donruss Heroes. 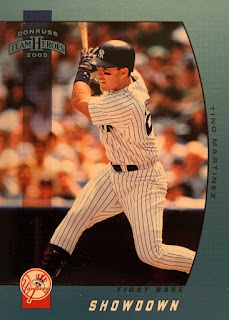 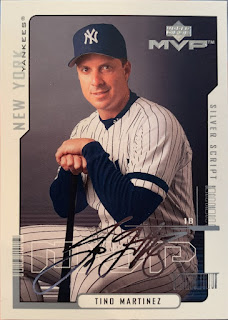 Perfect! Maybe it's not a fancy low number or autograph, but coming from an unexpected PWE? I wouldn't have (silver) scripted it any other way, now that I think about it. That's what most of my Tino cards are, in fact. Cards from random, long since forgotten sets of the late '90's and early '00s.

Blog friend and minor league card expert Alex sent me a really cool oddball I had laid eyes on, along with a note on the background of the card. I had never, ever seen it in all my years of eBay browsing. It was released as part of a 5-card set in 1999 that included Nolan Ryan, Dick Allen, Jeremy Burnitz, and Rankin Johnson. Alex and I both agreed we wished they used a different photo than the one that showed up on several Tino minor league cards. But hey, at least they zoomed in on. I appreciate Alex's gesture very much. 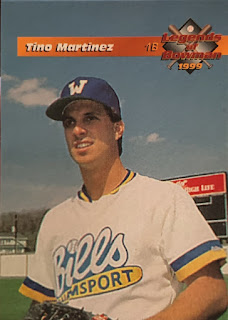 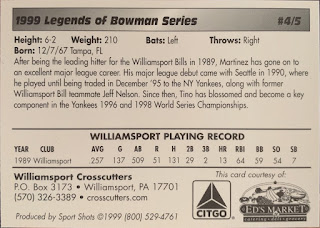 2020 has also seen even more Tino autographs flood the market. In fact, I have eight Tino's from 2020, and all of them include an autograph. I picked up these three after waiting for initial prices to drop, which...gasp...they did once the hot next thing came out. 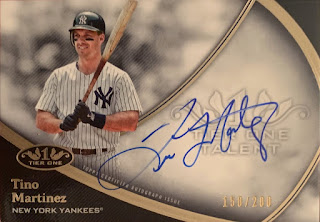 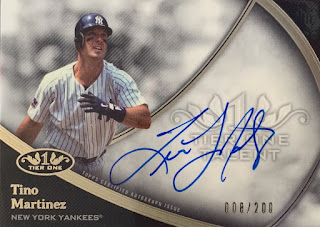 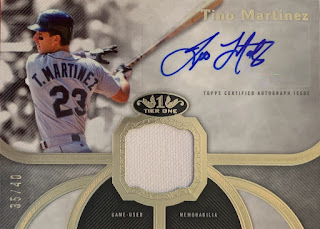 Thank you to everyone has contributed to my 1K collection of Tino cards. It's been many of you since 2011, and I appreciate it!

Posted by The Lost Collector at 7:00 PM