I've mentioned a few times that I'm a bit bored with baseball cards currently. I'd say it's the result of 2020, with cards not readily available to open. And even if I do stumble upon some, the sets are pretty lackluster.
Some of it has to do with also coming down from the emotional collecting high of 1,000 Tino cards. I'm not chasing down his cards with the same vigor after hitting that milestone.
Maybe I'll change my blog to "The Bored Collector."
Nah.
So in searching for some fulfillment, I've seen a few blogs show some racing cards. No, I do not plan on collecting racing cards, although I did buy the Lewis Hamilton Topps Now card. But I don't plan on collecting nor buying any packs.
However, I did see a few relics shown off, and they are pretty damn cool! Race-used tires! Firesuits! Gloves! SHEET METAL!
That's cool. That's more fun than a plan gray swatch.
So off to eBay I went to sample a few of these.
The first I bought was a race-used tire card. This was a cheapy. Daniel Hemric. He's made most of his starts in the XFinity and Truck series, although does have a few Cup starts to his name. He actually was the 2019 Cup Series Rookie of the Year, although it was more by default than anything else. This tire relic is pretty cool though, featuring three pieces of tire, and one with some fibers! 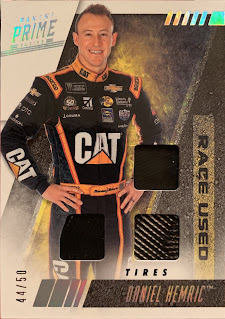 The next card I snagged was a quad-relic of Cup mainstay Ryan Blaney. Now we're talking. This is a fun one. It contains two pieces of sheet metal, one piece of fire suit, and one piece of...I don't know. It's rubbery, but not tire rubber. At least I don't think it's tire rubber. It could be. I'd say it's either shoe or glove? That's my biggest complain with these NASCAR cards: that the cards don't say what the relics are. Similar to baseball relic cards, it's all very vague. 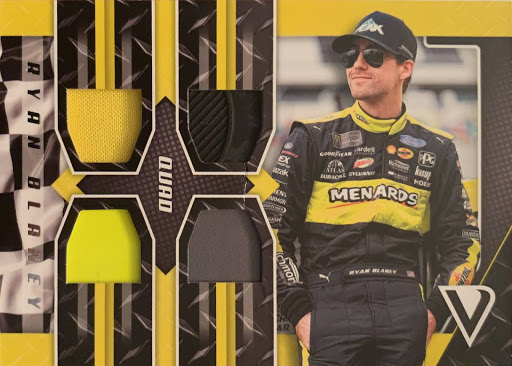 The last card is a dual sheet metal card of Clint Bowyer. I actually thought the relic piece on the left would be rubber, but it's not. It's metal. I'm thinking it's from the front of Bowyer's car, from the "grill" area or from the fake headlights. Looks like grill. Not sure! 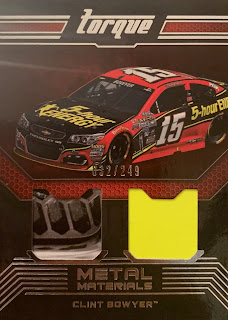 I doubt I'll pick up more of these. I basically paid money just to look at them. But they sure are cool and more fun than "jersey that is not from any particular season, game, or event."
Posted by The Lost Collector at 8:20 AM