One of my favorite scenes in The Shawshank Redemption is within the last few minutes of the film. Red decides to cross the border to reunite with Andy breaking his parole in the process. One line always sticks out to me:
"I hope the Pacific is as blue as it has been in my dreams."
I'm not sure why that line is memorable for me. I have connection or love for the Pacific Ocean. Sure, I've seen it and been in it a few times, but it looks just like he ocean over here on the East Coast.
However, that line once again popped into my head when my newest Tino Martinez card arrived, a 1998 Pacific Platinum Blue. 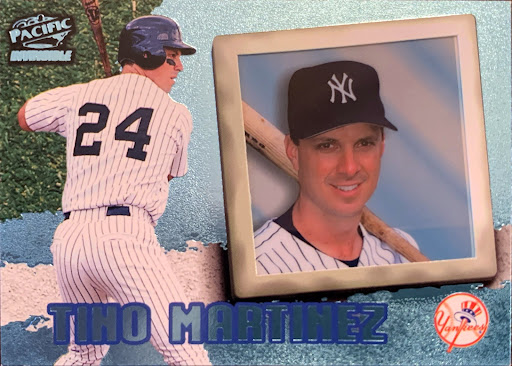 Nice card. The window behind Tino is translucent, and the blue is fairly striking in person. It's not a bright blue, but more of a Carolina-blue with some metallic flair to boot.
Pacific churned out some great cards, and Invincible was always one of those sub-brands that looked great each year. I look back with nothing but fondness on Pacific, and wish they were still making cards today.
Until then, even 20 years later, I'm still picking up cards from them that I didn't have, so I guess it's not all that bad.
Posted by The Lost Collector at 7:55 AM