Jeter and Mick...no, not that Mick

Similar to my blogging, my card-related pickups having really been coming to a halt. In both August and September, I sold more on eBay than I spent. Let's hear it for positive cash flow!
October is likely trending in this direction as well. Candidly, there's just nothing I want right now. No product excites me, no player excites me, no potential pick up excites me. Maybe that'll change, and I hope it does.
That doesn't mean I don't have envelopes coming in every now and then. Once in a while, when it feels like the right thing to do, I'll still pick up a Topps NOW card. I never buy directly from Topps. While that takes me out of the running for parallels and such, it keeps me in the $5 per card range. Sometimes, that can even be steep, but I don't buy these like I once did back in 2017 when Aaron Judge had one come out every day.
The first I picked up was an easy choice: Derek Jeter holding his plaque from Cooperstown. I'm not sure how many more cards will feature Jeter in this fashion. There will be probably a 30-card Target set in next year's Series One or something. But still, it was a no-brainer for me to pick up a card featuring Jeter holding his likeness that will hang in Cooperstown forever. 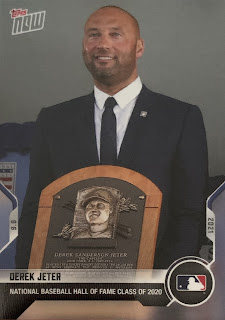 The next is a bit more of an off-the-path card for me, but I snagged a Mick Schumacher Topps NOW rookie card commemorating his appearance in the Belgian Grand Prix. I've actually bought a few F1 Topps Now card, including the first Lewis Hamilton last year...a card that cost me $5 at the time and now fetches toward $1K. It seemed logical to buy at the time since he's one of the most popular athletes in the world. 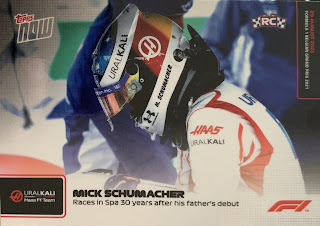 Similarly, Mick's father, Michael Schumacher, was one of the greatest F1 drivers of all time. He was just the subject of a Netflix documentary about his life on the track, which was an enjoyable way to spend 90 minutes. I recommend it if you haven't seen it. It was definitely a puff piece, but reminded me of how great he truly was. Mick is young and has shown a good ability, so I figured it was wise to snag a RC.
I know F1 cards have gotten very popular, although I don't plan on collecting or buying them frequently. Although I am a racing fan, I don't love F1. It's basically a glorified time trial and the cars are a bit too tech-advanced for me. It doesn't really feel like racing as much as it does space travel. I have a family member who races F4, and that's more my speed. Still, there is no denying how popular it is, and the drivers are some of the biggest international stars in the world.
Two vastly different subjects, but from the same card concept. And to me, a decent way to spend $10.
Posted by The Lost Collector at 11:40 AM