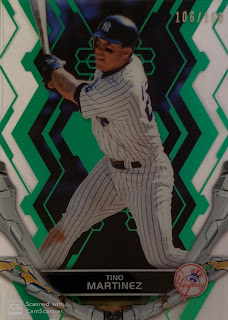 The year of Tino's re-emergence in the hobby continues.

I don't really run to check out new checklists when they are released on Twitter. Plus, new checklists come out every few days since Topps is releasing about two new sets each week. That number may or may not be fabricated.

I find out about new Tinos when I open my eBay saved searched and all of a sudden there are a bunch of his cards I've never seen. This is happening very often in 2019!

A week or two ago, my search was once again flooded with unfamiliar looking cards. In this instance, Tino was included in 2019 Topps Hi-Tek. I've always had a bit of a love-hate relationship with this particular set. First and foremost, it's confusing, with a million patterns and parallels. Back in the late '90s, there was a home/road version of each card, and then about 30 different patterns of each. Crazy!

On the flip side, they are usually some of the cooler looking cards Topps releases. I'm a sucker for clearcut/acetate cards, going back to the early '90s when I first saw them start to pop up. They've always caught my eye. Something about a see-through card is just very appealing to me. Some of the coolest sets of the '90s included acetate, like 1996 Ultra Season's Crowns, Skybox EX, and Stadium Club Clearcuts.

I still have no idea how many parallels or versions there are, but I did snag the green parallel for what I considered to be a good price. I'm sure I'll find the others as the product newness works off. And of course, there are autographs. 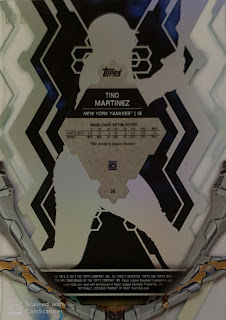 While I'll never fully be on board with this set, I can't deny that it looks great and that I still love clearcut cards.

I guess I'm just a Tek nerd at heart.

Posted by The Lost Collector at 9:24 PM