From what I understand, Bowman in the wild is quite rare.

We're still relatively locked down in here in NJ. While Targets and Walmarts are indeed open, I'm not going to risk it by going hunting for baseball cards. That's silly.

What I did do, back in April, was pre-order a blaster of 2020 Bowman on Amazon. I paid $22 for it, which is $2 more than the price tag in store, but much less than you can find them on eBay from retail flippers who fill their cards and take a picture of it for Twitter. Ever notice how these flood your timelines, even when you don't follow 99.9% of the people posting them?

Since the product was still a month away, and prices went crazy, I figured I'd end up getting an order cancelation. That's apparently happening with the big box stores, unable to fulfill online orders.

However, in a true credit to this Amazon seller, I recently received a notification that my order had shipped.

I did hope to pull a Jasson Dominguez card. He's the prospect rage right now, and surely many of you consider him an overhyped Yankees prospect. Maybe he is. But he would be this hyped on any team. That's what happens when you sign for $5.1Mil and are nicked The Martian. His tools are that good. Remember, last year it was a Rays prospect who was the rage. The Rays. Whether or not he puts it all together in a few years, obviously we won't know.

Spoiler alert: of my 72 cards, he was not one of them. Bummer.

Still, it was nice to open a few packs, and I was still in disbelief the vendor came through for me.

In a rare occurrence, I pulled an autograph. First pack too. This is Reds 3B prospect Rece Hinds. He's their #8 prospect according to MLB Pipeline. These fall 1:62 in a blaster. 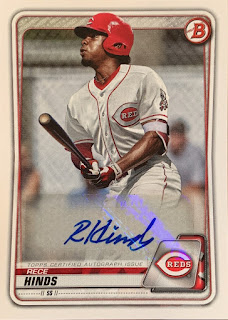 I also pulled a shimmer blue refractor. These are awesome looking, and actually fall 1:256, so actually a pretty rare pull from a blaster. I don't know much about him, but hopefully will recoup a couple bucks back on eBay with this card. It's numbered /150. 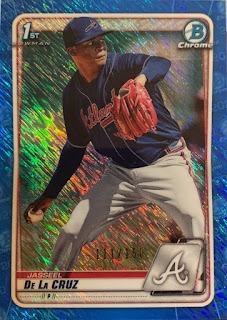 In terms of Yankees, I did come away with two decent ones.

I am a big Clarke Schmidt fan, so I'm happy to get his base card here. Yep, not calling this a "paper" version because that is dumb. 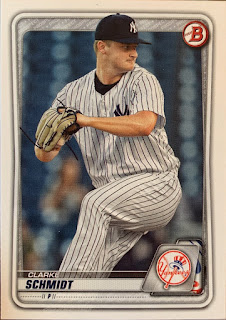 As for major leaguers, the only ones in the set are Aaron Judge and Gleyber Torres. I was able to snag the Gleyber. Fun to see him officially listed as "SS." 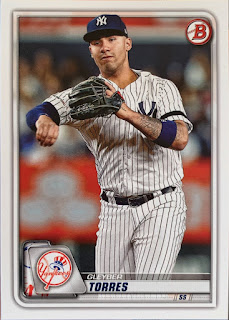 Otherwise, I got a few solid RCs and prospects, which is to be expected in Bowman. I know Luis Robert is well regarded, although nit sure why this is a RC? I guess because he was expected to be in the Majors by this time when planning was underway? 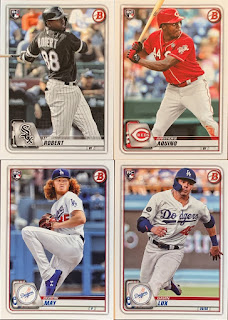 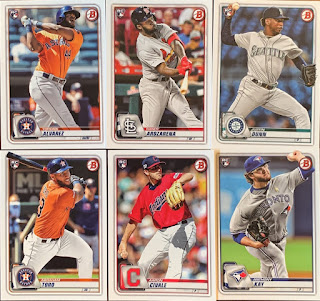 And the inserts - while no keepers (these are available on TCDB) - are all nice looking and very refractory. The 1990 Reprints look cool as Refractors, that's for sure. 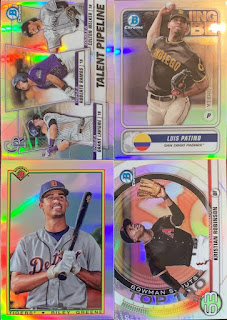 It was fun to open some cards. I haven't done that in quite a while, and more than anything, appreciated the seller here honoring the original price.

Posted by The Lost Collector at 9:10 AM