Will we see Schmidt? 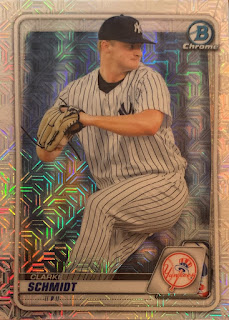 It's going to be a weird year for prospects.

With no minor league season, key up and comers will be missing out on a crucial year of development. By this time we would have seen guys putting themselves on the map, others taking a step back, and then the start of short season rookie ball for new draftees. We might have even gotten our first glimpse at Jasson Dominguez.

Instead, teams will bring some prospects to Spring Training 2.0, but the numbers won't be vast. It'll be guys who need to keep developing and are close to the majors, which can be a combination of top prospects and organizational depth.

Yankees top pitching prospect Clarke Schmidt fits that mold. He's a guy that would have been knocking on the door at some point this season, assuming he stayed healthy.

Now, he'll have the chance to help the Big League club. Whether the Yankees will need to turn to him or not is another thing. The Yankees starting rotation should probably be Cole, Tanaka, Paxton, Happ, and Montgomery. I'd bet money on the Yankees needing to dip into that depth with the injury history of some of those guys.

Should they need a sixth or seventh starter, Schmidt could be in line.

I'm all for it. He's 24. If you can get something valuable out of him this season, I say you do it. In a year like this, it's almost like you might need to throw service time out the window if you've got a shot.

I've continued to pick up Schmidt cards here and there, although they have much more momentum now than they did a year ago, when I was routinely picking up autographs for $5. 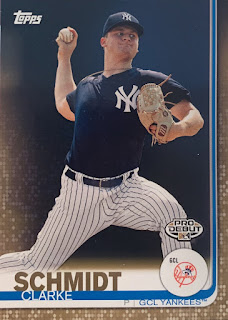 Yes, it'll be a weird year for sure. But with that weirdness could come the debut of some prospects I've been looking forward to seeing.
Posted by The Lost Collector at 8:45 AM