When Collecting Cutch challenged us to post about our favorite John Travolta movie, I wasn't sure which direction to go.

Pulp Fiction is an obvious choice. I like it, but wouldn't say I love it. Randomly, I really like Look Who's Talking, but I think that more has to do with watching it as a kid. Can't really miss with Grease, but I've seen it so many times (family favorite so it was on A LOT), that I actually sort of despise it now.

But when PWE showed up yesterday from a TCDB, it hit me like a bolt from the sky. Phenomenon.

That's my favorite. I haven't seen it in a long time, but I certainly remember the story well. An average guy who can do extraordinary things. I sort of relate that back to this guy, who impresses me more and more by the day: 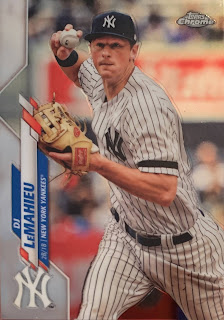 The story starts when George Malley, Travolta's character, sees an unexplained bolt of light from the sky. It sort of looks like this when it hits him: Bam! The story goes on to show George suddenly being in touch with parts of his brain that most aren't, from quickly learning languages to being able to move objects to predicting disasters. He became a true phenom in every sense of the word, which is the name given to many young players in baseball. First-year phenoms or future stars: 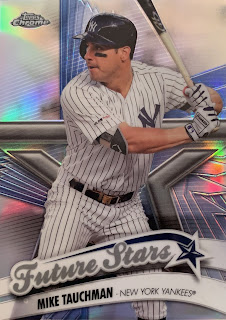 Ultimately the story has a sad ending, which I won't spoil.

And while unconventional, I definitely think that this movie is my favorite of all of Travolta's hits. And if you want to read more on Travolta and how he unfortunately lost his wife to breast cancer, take a look at Collecting Cutch's contest post here. And let's continue to raise awareness for breast cancer.

Posted by The Lost Collector at 8:56 AM