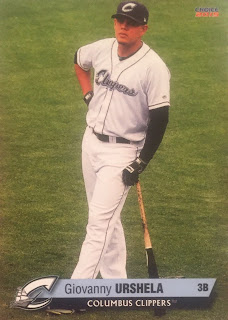 When sophomore 3B Miguel Andujar went down with a shoulder injury at the beginning of the season, it was a tough situation for the Yankees. With Didi Gregorius already out recovering from Tommy John surgery, it looked like the left side of the infield that was so good offensively last year would take a hit.

The plan was for DJ LeMahieu to shift over to 3B. Giovanny Urshela, a light-hitting, excellent-fielding 3B was called up for depth, and made his Yankees debut on April 6.

From there, he didn't look back. He hit .345 in April while playing sparkling defense. He took the Yankees 3B job and ran with it, freeing up LeMahieu to focus on 2B until Didi was back. As if playing a Gold Glove-caliber 3B wasn't enough, he continued his offensive outburst, hitting in the .330s and developing unexpected power. Hitting .240 with little power and his defense would have worked. Hitting .330 with 20-HR power? Completely unexpected.

As of writing this, he's at .336 with 18 homers and 66 RBIs. He'll qualify amongst the batting leader soon. He's only 27, so perhaps he's put it together. Or maybe he's a one-hit wonder. Time will tell.

I first came across Urshela in-person at an Indians game in June, 2015. I remember chuckling at the name, as it reminded me or Ursula from The Little Mermaid.

I look forward to Urshela showing up in card products later in the year, but for now, Matt Prigge of Summer of 74 hooked me up with these two minor league Gio cards. I had a Gio 2015 Topps RC at some point, but I shipped it off to him in a TTM request earlier this season, and haven't received it back. Of course, that has become a card that now sells for a few bucks a pop. 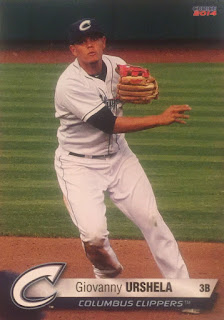 Regardless, I love these minor league cards, and I thank Matt for sending them along!
Posted by The Lost Collector at 4:10 PM

Email ThisBlogThis!Share to TwitterShare to FacebookShare to Pinterest
Labels: Gio Ursula, Summer of 74