This is an autograph I’ve been wanting for a while. The Yankees 2011 First Found Draft Pick Dante Bichette Jr signed my 2011 Bowman. I wrote to him at Charleston, where he is playing full-season Low A ball. Bichette tore up the GCL last year, hitting .342. He’s gotten off to a really slow start in Charleston, hitting just .229. He’s only 19 though, so I’m not too worried the low BA right now against older players. 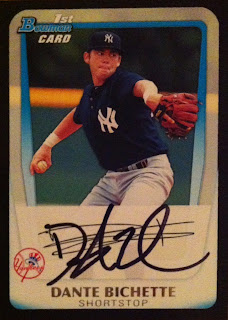 He has a bit of a messy signature. It looks even worse over his facsimile signature pre-printed on the card. I tried him once last year without success, so I’m thrilled to add this auto. It came back in only 10 days.
Posted by The Lost Collector at 9:00 AM