My favorite Yankee born in the '80s

In his latest contest installment, Collecting Cutch asks who our favorite player born in the '80s is. I had no answer off the top of my head. Tino was born in the '60s, and Ty Hensley + all the current Yankees I admire were born in the '90s. Tough choice.

Ultimately, the decision came down to a coupe of older Yankees, and I think I chose well: 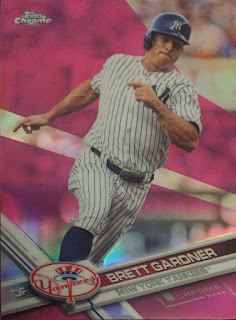 Plus a pink card!

Brett Gardner was born in 1983, and is the longest tenured Yankee, making his debut in 2008 at the old Stadium. Since then, he's been a constant part of the Yankees over the last decade. He seemed to be always overlooked or pushed aside for shinier new models, but somehow, no matter what, he always ends up playing more than expected and contributing to the team in never-ending ways.

Gardner started his career has a slap-hitting, fast-running leadoff type hitter. Somehow he has developed into a 20-HR guy, learning to yank balls into NY's short porch.

He is a fiery dude, although I can't say I agreed with his recent binge of dugout bashing with his bat. I don't mind emotion, but I didn't like that.

Still, it's hard for any Yankee fan not to appreciate what he has given the team over the last 10+ seasons. He's been a consistent force, and someone who I'm sure I'll appreciate more once he's no longer around.

Posted by The Lost Collector at 8:02 PM