When I was a small child, I remember a few television commercials vividly. The Duracell Battery bashing together at the end was one. I don't know why, but I found the noise to be really loud. Like unbearably loud. I remember the creepy Twizzler's spots with the disembodied lips. I recall always enjoying seeing the little Pillsbury Dough Boy laughing while getting his belly poked.
And I remember that funny little friendly Hamburger Helper glove, aptly named Helping Hand. That small hand was adorable, hopping all around the TV screen helping busy families prepare meals quick meals.
That's why I'm a little ashamed that a card I've been aware of for over 20 years finally became mine.
Back in 1998, Hamburger Helper issued some cards on select product boxes. After his 44-HR season in 1997, Tino Martinez became a subject of their Home Run Heroes set. While keenly aware, I never managed to snag the card until it popped up on eBay just last week. 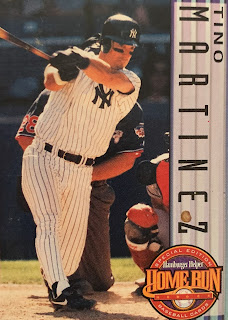 The biggest complaint I have is that Helping Hand wasn't on the card! This is a big miss! I would have been thrilled to have that little lefty grace the design somewhere.
Overall, the card is fine and feels like a late 90s food issue. It was cut out nicely and with care, so no qualms there.
There aren't a ton of Tino oddballs out there, but this is one that was long overdue to find its way into my collection.
Posted by The Lost Collector at 9:05 AM