Not a time for haggling over pennies

I use the "Make An Offer" feature on eBay frequently. I try not to low ball, as most of the cards I'm making offer are only a few bucks anyways. But if someone has a card for $4.99, why not see if I can get it for $3? At worst, I can usually get it for a few cents cheaper after seller counteroffer.
However, there are times when cards pop up that are rarely seen, and out of fear of missing out on the card, I immediately choose "Buy It Now" instead of hoping I can get it for $.75 less. The opportunity cost of missing out is too great.
That recently happened with two Tino Martinez cards that I rarely see pop up, so naturally they would within a week of each other. These are not high end. But they are cards I have been keenly aware of, yet rarely see.
The first is from a brand that keeps aging like a fine wine. Pacific! For years, Pacific had a "Latinos of the Major League" insert set. I was always a little confused by this set, as I felt it was unfair to peg these particular players because of their heritage. However, Pacific was geared toward a Spanish-speaking population for years, so perhaps it wasn't odd at all. I'd be curious as to what others think. 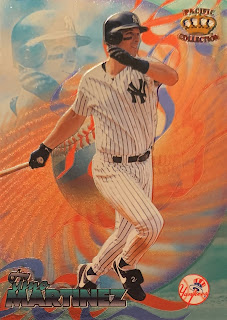 The other "Latinos of the Majors" cards from other years pop up a lot, but not this one from 1999 Pacific Crown. When I saw it for $2.99 or best offer, there was no time to haggle. I chucked it in my cart and checked out as fast as I could, although I still had time to got through Acorns to make sure I got my $.03 invested!
It's a beautiful card. A nice, textured foil with colors that really pop. Once again, Pacific designed a card that gets better in time.
The next is a rare card only in the sense that I never see it. I have plenty of the non-shiny base versions, but the Museum Collection never finds its way into my eBay feed. I finally snagged it for just over a buck, and again, no time to haggle over pennies. 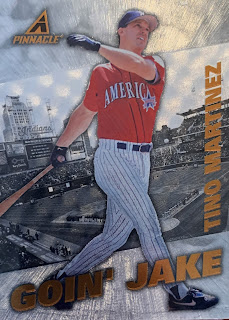 This card has always been special to me, both from the HR Derby he won to the fact that it was the first card Tino ever signed TTM for me.
Sometimes you gotta jump at the chance and not hold out for a sale or a better price. It's not worth the agony over missing rare cards to get a slightly better price.
Posted by The Lost Collector at 8:44 AM