First card of the year of a first year player

Yesterday, the first card I got in 2021 showed up on my doorstep.
I've always enjoyed prospect cards, but have yet to add a card of 2020 Yankees first rounder Austin Wells. Realizing Bowman Draft had come out, I did a quick search on eBay for Wells' card in the set. As expected, the Yankees tax was on him, as even the base cards were a little more than I wanted to pay.
Then I saw it!
For the same price as most of the base cards, someone had listed a gold parallel numbered to 50. I quickly added it to my card and felt like I had scored.
This was on Jan 1, so the seller shipped it very quickly, and yesterday it arrived. I was glad with my purchase, even if the graders out there will immediately see that the centering is off. Maybe that's why it was cheap! Numbered 48/50, it's a solid 1st year card. 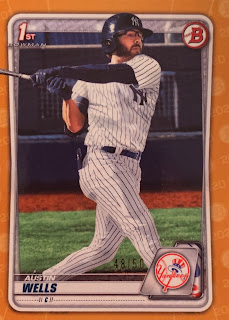 But there was an unadvertised bonus!
The seller also threw in the lowly base card, the same card which felt a little overpriced at a few bucks. Even though it was a mere throw-in, I was thrilled! 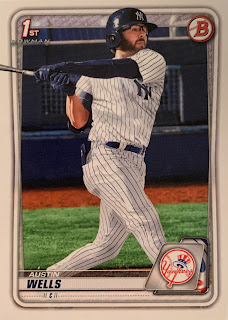 Not bad for my first two cards of the year. Now let's hope there's a minor league season and Wells can show why he was a first round pick.
Posted by The Lost Collector at 8:00 AM