The need to feel even

For many of us, we receive packages with a note that reads something like, "No need to send anything back. Just wanted to get rid of these."
Except it never seems to work that way.
Like so many others, I always feel like I have a debt to others who send me cards. No matter if the person said we're good and they need nothing in return, there is that unofficial score in my brain that says I'm behind and need to make things right.
I know I'm not alone feeling like this.
Earlier this week, I received a bubble mailer from Coach Tom at Waiting Til Next Year. A few weeks ago, I sent Tom a few Cubs items I received from the Cubs Race to Wrigley Virtual 5K I ran. I think I sent a small bag and the Cubs shirt that came in the race package.
I told Tom I didn't need anything in return. I wasn't lying! I truthfully had no use for the Cubs gear, and even if he didn't use them himself, I knew he could find a good home for the items. I wanted and expected nothing. I kept the race medal and that's all I needed.
In his note, Tom acknowledged that I said that, but also said "you must know that's not how I operate."
So Tom sent me a few cards, I'm sure to make himself feel better. It wasn't necessary, but the cards were great.
First off, a Robinson Cano signed card! A Cano autograph has been on my 'most wanted' for ages. I just never got around to getting one. It's sad that Cano is now a repeat PED offender. I assume the market for his cards had tanked pretty hard as a result. Yet I never did have that autograph, until now. Very cool! 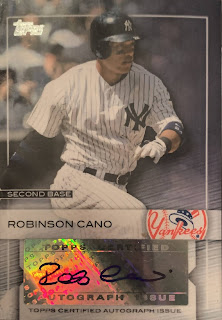 I had vaguely seen the Onyx Vintage set that was out, but hadn't;t acquired any. And Tom also delivered my first autograph of Yankees prospect Esteven Florial! Very cool! Florial made his debut last year and collected a hit. Hopefully there are plenty more of those to come. 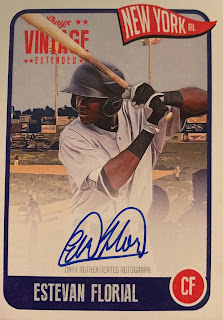 Although we were even to begin with, I really do appreciate these cards.
Now the only question is...do I need to send Tom something back?
Posted by The Lost Collector at 8:05 AM