For the most part, I don't pay much attention to a lot of the custom sets Topps sells exclusively online. These are mostly the Throwback Thursday or other curated sets, whether from athletes, artists, or influencers.
However, my interest was piqued when I saw that Derek Jeter was curating a 52-card set. I got the email, flipped through the checklist, and saw that there were two Tino Martinez cards. For a $19.99 price tag, I was in.
Or so I thought. I clearly just did not read the product description carefully. I thought my $19.99 purchase was giving me a 52-card boxed set.
It wasn't.
It was getting me one 10-card pack of the Topps x Derek Jeter set. ONE PACK!
By the time the realization was made, it was too late. I had clicked purchase. I should have known from the get-go. Outside of maybe a blaster or a hanger, when can you ever get anything like a full set from Topps for $20? I don't know, I just thought I was getting a small set from them. It was honestly a case of just believing what I wanted without clearly reading the description. A stupid mistake, and I was entirely at fault.
I'm not blaming Topps. I'm blaming me. Another sucker.
So I waited, but I wasn't very excited for it to arrive. My silver lining was that maybe I would get an autograph, which fell 1:12 packs. Not too outlandish. That would ease the sting. Or maybe I'd get a low numbered parallel or something. Maybe fate would give me a Tino 1/1 or something. There are cardboard gods, right?
Maybe this mistake would turn into a happy accident!
It's didn't.
My pack arrived last week, and this was the fruit of my $20.
First, the box is nice. Props for that. I wish the cards looked like that, actually. 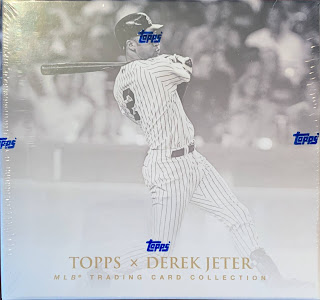 Here's how the pack was wrapped. It looked like a mini pop tart. 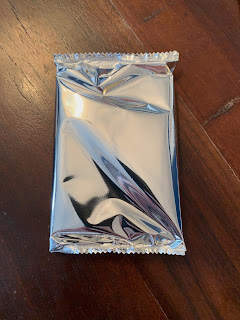 And here are ALL ten of my cards at two bucks a pop. 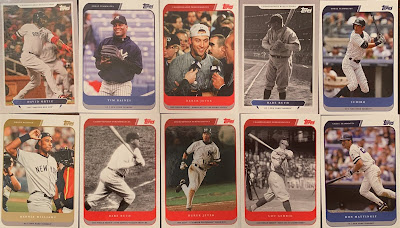 Yeah.
The first card was a David Ortiz, so I was pretty doomed off the bat. No fancy parallel. No autograph. No Tino.
It's not entirely all bad. The two Jeters are cool. Mattingly is cool. Backwards hat Bernie is cool. Sweet Ichiro too. Even the Tim Raines is pretty cool warming up for a game.
But man, for $20? I could have bought something much better. As many around these parts say, stick to singles and buying exactly what you want.
I know better.
I've already picked up the Tino cards for about $2 a piece, and one has already come: 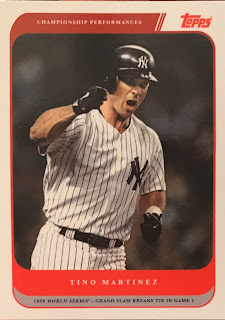 I should have done that from the start. Read carefully, everyone.
Posted by The Lost Collector at 8:00 PM