This card came to me from Kerry at Cards on Cards. He has sent me a bunch of Tinos from The Lost Years, as I'm sure he acquired a few during Tino's stint in St. Louis from 2002-2003. I wasn't collecting much in 2002, so I had never seen the UD Authenics. It's really cool to see Tino featured in Upper Deck's original design. I wish it didn't have the Cards logo and the "Sighed by Cardinals" text, but that's life. It's still sweet to see him in this design, and I may have to pursue the other Yanks from this set. 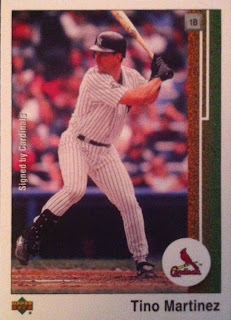 Posted by The Lost Collector at 8:30 AM