New Yankee starter Hiroki Kuroda signed the card I sent to him at Yankees spring training. From what I’ve seen, Kuroda seems to be a classy player who does and says all of the right things. I look from him to throw around 180 innings this yeah with an ERA right around 4.0. I’m sure he’ll find life in the AL East a bit more difficult than the NL West, but should find success by facing hitters who haven’t seen him much, as well as working with former battery-mate Russell Martin. I love the one-year deal for Kuroda while the Yanks prospects continue to develop. I’d much rather sign pitchers to one year deals instead of making multi-year commitments. See Burnett, AJ. 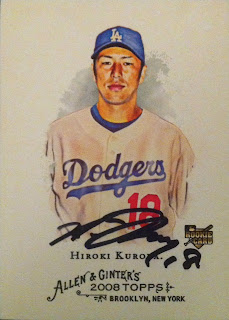 This was the only Kuroda card I own, but luckily it’s a nice A&G RC and the signature looks really good.
Posted by The Lost Collector at 8:30 AM