Nevermind, that wasn't all of the Topps Nows

In my last post, I mentioned that was it for Topps Now cards that were incoming.

What I didn't account for was one find its way to me in a surprise package, but that's exactly what happened after I made that last post. This came courtesy of Collecting Cutch, who said he snagged an extra one of these and thought I'd like it since Gleyber Torres was on it. He was right! 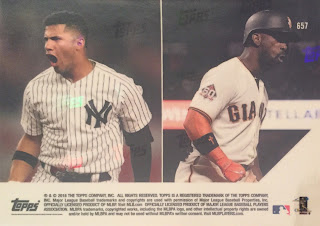 The front of the card, which I forgot to scan, recognizes an MLB record 81 walk-off HRs in 2018. Given this card was dated August 29th, I'd have to believe the record extended itself well beyond 81. It also served as a bit of foreshadowing, as McCutchen, pictured next to Torres, would be his teammate three days later.

Very cool and a great addition to my Torres collection, which is predominantly Topps Now cards.

However, I can't quite say it was my favorite card of the package, considering this was in there: 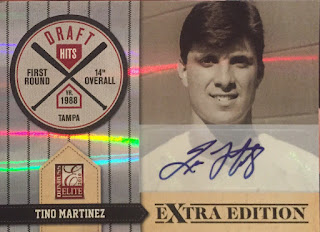 Ooooh la la. I've been after this card from 2010 Donruss Elite for a while! Any time I get to add a new Tino autograph feels like a very special moment in my collection, mostly because there just aren't many out there. 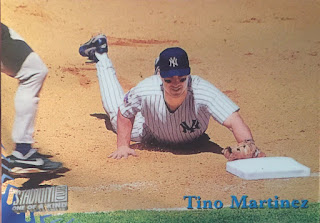 There was a second Tino I needed as well, from 1998 Stadium Club One of a Kind, #'d to just 150. I say "just 150" because that's a fairly low-numbered card for Tino. When serially-numbered cards became the range in the late '90s, many were numbered to a few thousand. So in 1998, 150 would have been very rare!

I've always felt like this was such a cool photo to have on a card as well, with Tino diving into 1B mitt-first for the out. 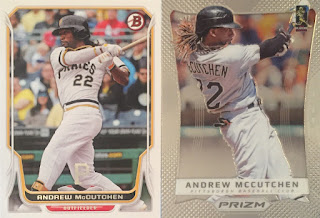 And of course, you can't end a package from Collecting Cutch without a few Andrew McCutchens! I would love for him to be back with the Yankees in 2019, but I don't see how it would happen. McCutchen should, and will, get a multiyear deal somewhere. I just hope it's someplace where he can compete for a championship. He's an all-around great dude and deserves it.

Brian from Collecting Cutch is a great dude as well, and I appreciate the excellent package!
Posted by The Lost Collector at 9:36 AM