Around Christmas, I got a large, large zapping from Zippy Zappy. I still haven't scanned it all to post about it. But I will.

Well, yesterday a PWE from the Luis Torrens Fan Club arrived, with a nice, moderate 3 cards. These are the kind of zappings that are right up my alley. A nice, non-stress inducing zapping.

The first card was this very attractive Aaron Judge from Panini Titan. Have you ever heard of Panini Titan? I didn't think so. It's so bizarre to me that Panini basically puts out as many sets as Topps. Where the heck to they sell them? 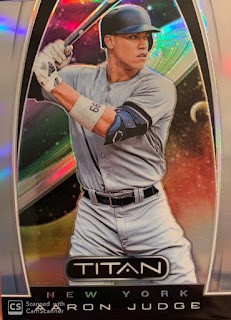 But let that fact not detract from the fact that it's a very, very cool card. There are shiny planets in the background. That is definitely good enough for me.

The next card is fairly trippy as well, featuring even more nebulae of sorts. Giancarlo Stanton also makes an outer space-like appearance. I always like Inception, although don't come across it or find it much. 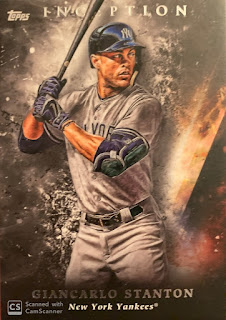 The last card was a ZZ special, a card of Indiana Pacer Victor Oladipo. I best remember Oladipo as a member of the Indiana Hoosiers team that got absolutely swallowed by Syracuse's 2-3 zone in the Sweet 16 in 2013. He shriveled in the moment and I loved it. Outside of that, Oladipo is pretty cool and has proven himself to be a star in the NBA. 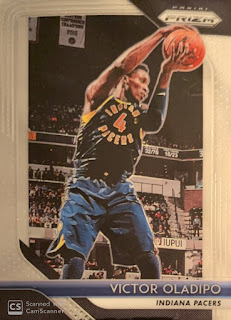 I couldn't remember if I made a comment about Oladipo or something, but ZZ sent it because he's a great player, and he was trying to coax me into a TTM attempt. Maybe I'll comply.

Thanks for the three card PWE, ZZ! One of these days I'll show the bombing from Christmas.
Posted by The Lost Collector at 8:32 AM