A positive Series One experience 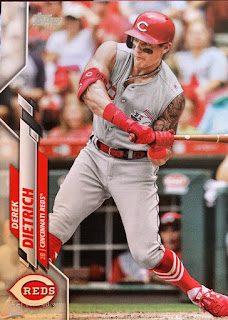 This past week was the least excited I've ever been for the start of the baseball card season.

Two years ago, I got home from work at 8pm or so, got in my car, got to Target only to realize I forgot the gift cards I had set aside. I went back and got them once I confirmed the store had the new supply of cards in. It was a two hour affair. This year, there was zero chance I was going to make that sort of effort.

On Saturday, my son wanted to go to this new comic book store we hadn't tried to look for Pokemon cards (because kids like those more than sports cards). It happened to be on the way to my usual Target. I decided that we'd hit up his store first, then continue on to Target. I even toyed with the possibility of driving to a Target that is further away because they usually have a better stock of cards. But I took the chance on the local one.

Aside from the usual cart of discarded shit in the aisle, I was happy to see a bunch of 2020 blasters, hangers, and loose packs. I won't touch the loose packs at Target. We all know they've been molested by some beast. But the blasters and hangers were well-stocked. Even better, the distributor took away all the unsold ones from 2019, so it wasn't mass chaos.

My son grabbed a box of Pokemon Sword and Shield, and I grabbed one blaster and one hanger, and we were off!

I got home and busted the hanger first. I usually split it down the middle because that's where the goodies are lumped together.

The first card was this guy. Never heard of him. But I do like how his right elbow overlaps the design. That's a fun touch and I like when cards do that. 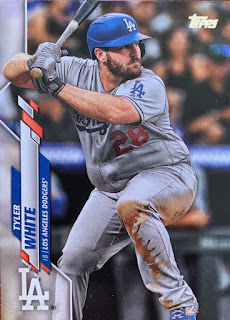 The second card was this, which is probably my favorite Series One card so far. What a great card of a great player in a great uniform, even if the baby blues are starting to be a bit overdone. 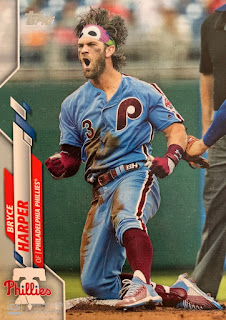 As for the design, I don't mind it. I never do, even when it stinks. I can see why some think it looks like Bowman. But I like Bowman. It shares some characteristics, for sure. I think it's clean, easy to read, and overall looks pretty sharp. Whether or not it's true, it feels like it was done by the same single designer who has done each design since 2016. It definitely shares some very similar elements to 2016, 2018, and 2019. But I'm cool with it. Just another year.

Actually, one complaint. The gloss! Holy moly are these things slippery. I kept thinking that even if I do get one of the Yanks to sign one of these for me, there's no way an autograph would stick. I need to remove a ton of gloss before sending these out for signatures.

Back to the cards. Within the aforementioned middle of the stack, I did indeed get some goodies...and they were Yankees goodies! First, this was facing backwards! 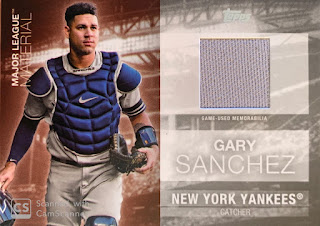 I still like pulling relics, even though this is probably a $3 card if I were to sell it. But I never pull relics of my team, and it's the first time I pulled one from a hanger. Ever. I didn't end up counting the cards, but I assume I got a few less because of it, although it's not super thick.

The Sanchez was followed by even more Yankee goodies - a Gleyber Torres Gold, which I was most excited about, and an Aaron Judge Turkey Red. 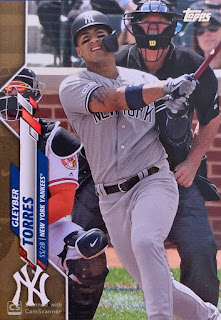 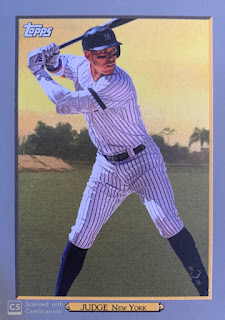 As for the Turkey Reds, I like them! I've always liked Turkeys. I like Turkey Red cards more than actual turkey (Thanksgiving meal is overrated). I feel like this isn't the strongest Turkey Red effort, as the mid 2000s versions used a fun texture, while these are flat. So I can't get as totally on board here as I'd like, but the cards look really good and the photos against the background are great.

They've been a TTM favorite of mine for a long time. 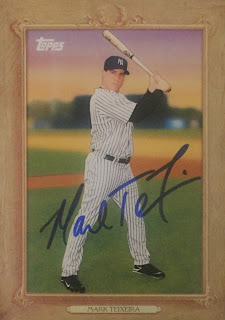 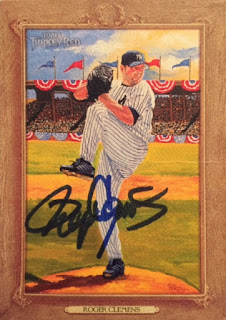 The Chrome Turkeys are pretty nice, but they are a bit bendy. I bet the colored refractors are very pretty. 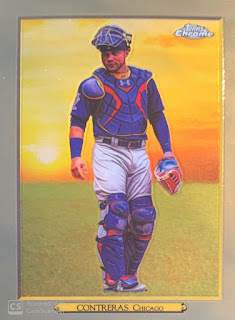 I don't know what to think about the "Best Of" cards. I like the 1950s and 1990s designs, I suppose. At the least the lower third of the card. But I think the concept for the set stinks. I'm very sick of these huge insert sets and just wedging all the legends into them. Same thing year after year. Give me a 10 card RBI Machine or Slick Gloves or something. What happened to the Fleer Ultra 10-card insert sets where they didn't look just like a modified base cards? I guess it's because I grew up in a time where inserts were special and were different and you looked forward to them, but it's very apparent Topps just doesn't care about them. The designers who make digital Bunt cards use some sweet designs. Let's call in those guys for a few insert sets. 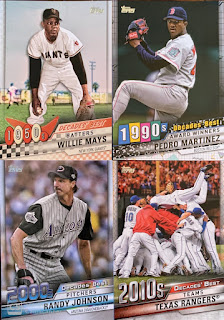 And it wouldn't be Series One without old designs! 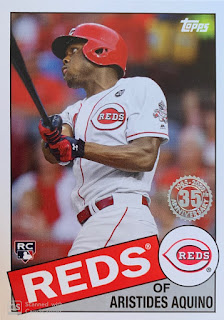 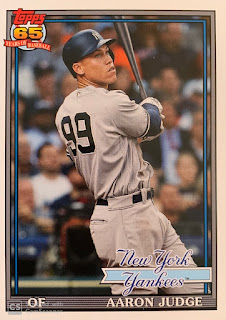 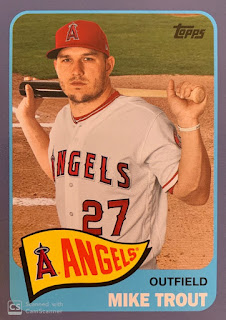 The Trout was a blue SP (these aren't serially numbered). Great guy to pull, although the card was damaged with a peeling corner and some weird smudge on it? Maybe Topps will replace it?

The Vlad Jr Highlight cards aren't too bad compared to recent player highlight series. I like the nod to 1953 in there. Much happier he was the Target guy versus Hoskins. 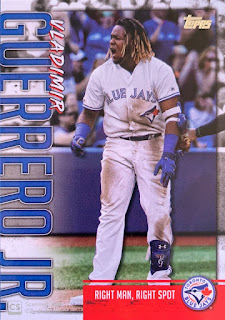 Glad to see these back. I've never won one, but I like them. It's gambling, you know. It's a prop bet on if a guy will hit a homer. Gambling on sports is fun. Tell your state to get with it and legalize online gambling (not applicable to those of you who live in NJ, PA, WV, IN, NH, and soon CO). 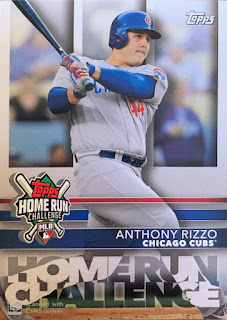 I did score two SP photo variations as well. The first I didn't notice until going back through after. This came from the hanger as well: 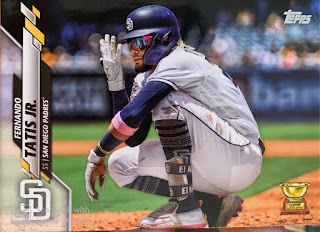 Nice! Very open to trading this for a Gleyber of similar stature.

The second was the very first card in one of my blaster packs. I didn't know it existed until Friday night, so I thought it was funny that I snagged it. Gerrit Cole is a Yankee! 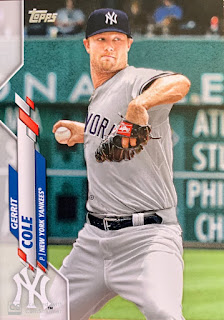 And my Manu-thingie was a good one too! I thought these were kind of dumb when I saw them on Twitter, but I don't dislike them. The medallion isn't too obnoxious. And Ichiro is pretty awesome. I'll be hanging onto this one until his Cooperstown induction. 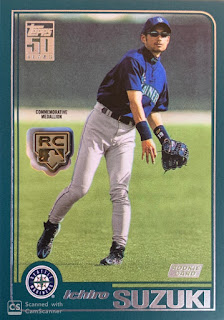 So there it is. Pretty good for one blaster and a hanger! It's about what you expect from Topps Series One. I had a good experience with it. It helped that I had some good luck with Yankees, had some decent pulls, and found the product on my first try. I won't be buying any more of it, but everything has been loaded into the TCDB and hopefully I can snag some of the Yanks I'm missing.

Let the card season begin!
Posted by The Lost Collector at 7:00 PM