I recently completed a TCDB trade with a user named NYMHall. I received two Tino cards, as well as an Aaron Judge, in exchange for five different Mets card. Rather, a few were cards of current Mets but shown on different teams, such as Marcus Stroman with the Jays.

The highlight for me was a 1998 Pinnacle Snapshot. I was surprised that when I actually opened the package, it wasn't really a card at all. It was a slightly larger...errr...photo, as the set name would suggest.

Now, I am certainly counting this as a Tino card, as it was an issued card set. Or something. I think I just expected it was a full bleed card of the snapshot. Sort of like Archives Snapshots have become. I didn't anticipate this being a photo on photo paper. 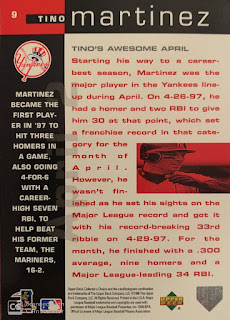 Lastly, the third card in this deal was of 2017 AL MVP, Aaron Judge. Bowman Platinum isn't something I've ever opened or seen in the wild, so always nice to pick up cards from these sets. 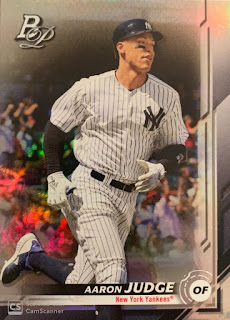 Cool trade, even if it made me feel like a bit of a failure for not knowing these Tinos existed.
Posted by The Lost Collector at 9:35 AM