While I wait for Series One...

Despite my lack of general excitement for 2020 Topps Series One, I still plan to pick some up this weekend. I have some Target gift cards for Christmas, and I usually save them for this occasion. I'll venture out at some point and hopefully will find a blaster or hanger box.

I do have a Yankees team set on the way that I'll use for my Topps Yankees Project TTM requests. I usually order a second to keep intact.

Anyways, while I wait, a few cards did roll in this week, including some TCDB trades. I'll get to those in another post.

This week's eBay mail days consisted of Yankees prospects. For some reason I continue to buy their cards. I haven't gotten any Clarke Schmidts lately because the secret about him being underpriced is out. I'm glad I stocked up when he did. If he has a big Spring Training, I'll definitely unload some because I bought too many.

It's not often you can get the Yankees first rounder for dirt cheap, but I guess that's what happens when all the focus is on Jasson Dominguez. So I found these two Anthony Volpe cards, and won them for a very affordable price. I hope he lights it up this year! 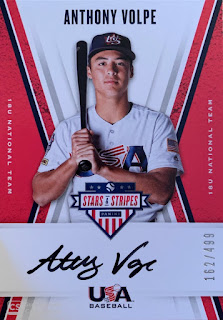 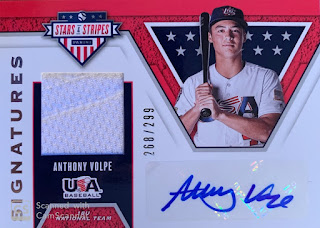 Another guy gaining some traction in the Yanks system is Antonio Cabello. I won this for the minimum bid of $0.99 (Yes, ZZ, it cost $3 to have it shipped so it was $4.34 after shipping and tax). His signature really stinks. One of the worst I've ever seen, I think. 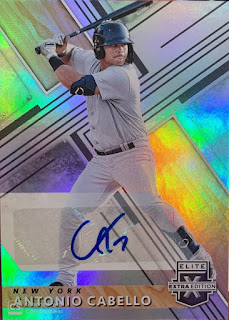 The last card...WTF? Just kidding, I bought it on purpose. I traded it to a guy on TCDB, but after a month he told me the card never arrived, but said not to worry about it. I still felt bad, so I ordered a new one and was going to ship it to him. Right before the replacement arrived, he sent me a note and said it DID actually arrive. So now I have it. I guess I'll put it back on TCDB. At least it's a popular player. 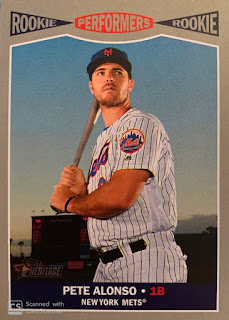 Alrighty, so the 2019 NL ROY and two dudes who might never reach the majors. I guess it really is time to open some 2020 Topps.
Posted by The Lost Collector at 8:01 AM