That's as Valentine's Day punny as I'm going to get. And it really has nothing to do with this card.

Miguel Andujar had an excellent rookie season last year, hitting .297 with 27 HRs, and 92 RBIs. He played the whole year at age 23. Those are certainly respectable numbers for a guy so young.

Most people are choosing to focus on his defensive shortcomings. I think they are a bit overblown. Yes, he needs to improve, but he shouldn't be written off just yet. He's got a rocket arm, and many hacks have turned into above average defenders over the course of their career. I'm in the camp of leave the guy alone, let him work on his craft, and enjoy the benefits of his bat in the lineup. 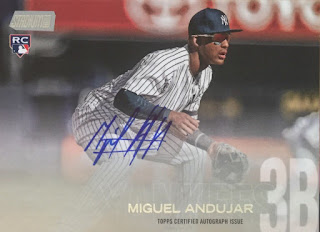 He had many autographs last year in what was his official rookie card year. I wanted to pick one up to celebrate his season, and ultimately settled on this from Stadium Club...one appropriately showing him on defense.

I hope he has a big year and doesn't fall into the dreaded sophomore slump. He is a tremendous talent, and I, for one, am glad he's still a Yankee.
Posted by The Lost Collector at 9:48 AM