I guess not much has changed in 8 years!

Regardless, I'm happy to say I'm still at it 8 years and over 2,100 posts later. The vast majority of my posts are simply show & tells, but that's the real reason my blog exists. It's to keep me engaged. I don't want to just acquire cards and put them away and have that be the end of the experience. Even if a quick blog post is the buffer between that, it makes the acquisition that much more meaningful.

I can honestly say that I might not still be collecting if it wasn't for the blog. In that sense, it's really what has continued to fuel my enjoyment of the hobby since I got back into collecting.

I feel like my blog is really focused on a couple of topics: blogger packages, TTMs, Tino Martinez, and Ty Hensley. Those are the content drivers, as I'm rarely original enough to pull a post out of thin air otherwise.

With that, it felt appropriate to show off a couple of new Tino Martinez and Ty Hensley additions, as those guys are what keep me ticking (and spending).

I saw this Tino card on eBay and was one I knew I hadn't seen before. I have the single relic of Tino, but was shocked to see Todd Helton on there with a jersey swatch. Numbered to just 100, I knew I might not see it again. It was listed for $8, I offered $4, and it was accepted. 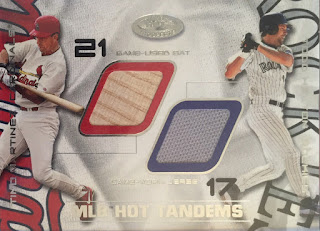 On to Ty Hensley #111 and 112. I usually avoid the COMC auctions on eBay. They annoy me. I'm not sure why. However, this was actually a very pleasant experience, as combined shipping really came to the rescue. 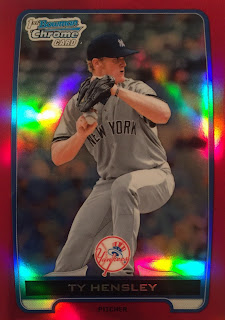 This rare 2012 Bowman Draft Chome Red Refractor was listed for just $2.50. It's numbered 3/5, and I don't think I had ever seen it in the wild before this. 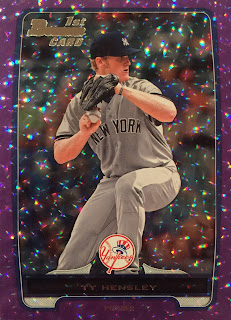 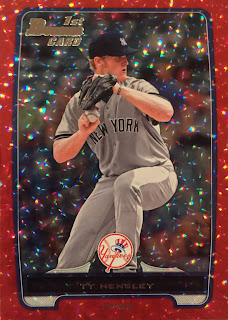 Alongside it were a Purple Ice from the same set (8/10) for another $2.50, and Red Ice for just  $1.35 (9/25). I already had the Red Ice, but for that price with combined shipping, I couldn't leave it there. So I snagged all three for around $10 shipped. That is a big win and has me seriously thinking about the 2012 Bowman Draft rainbow, especially because I have 2 printing plates and because the Super is for sale ($89...too much).

Posted by The Lost Collector at 9:49 AM