A lot of autograph collectors prefer index cards as their item of choice to be adorned with a signature. I prefer cards, although have nothing against index cards. I just like a little more going on than a plain white background.

That's not to say I haven't accumulated a few over the years. In fact, a few bloggers have sent me some, and I'm always willing to take them off anyone's hands.

When I was starting out with TTMs in the late '90s, I frequently sent index cards. Often, I didn't have an actual card to send. In 2017, I can just go make a card on the rookies app, or find one quickly on a variety of retail sites. But times were different 20 years ago, and index cards were readily available and cheap, especially for a teenager.

In digging through a box of old collectibles I have, here are a few signed index cards from the late '90s I found: 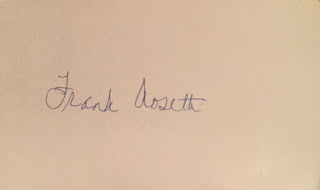 This one is pretty cool, signed by Frank Crosetti. He also sent a signed black and white photo, which I still have. 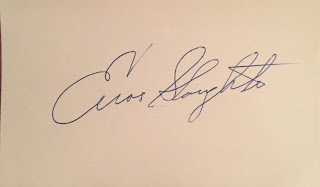 Enos Slaughter. I wish I had gotten him on a card, but as a youngster I never dreamed I'd own cards from the '50s one day. 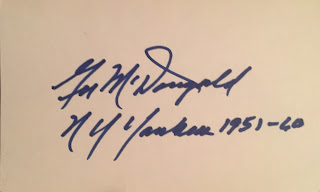 Gil McDougald had an amazing signature. He was a great TTM signer too. 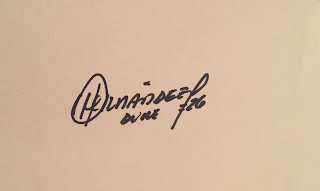 I didn't have any cards of El Duque yet when he was a rookie, so he signed my index card. I actually sent a picture from the newspaper too, which he signed. Old school! 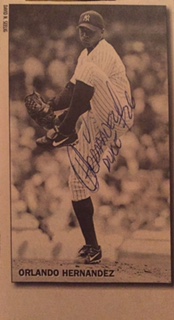 Here are two former Yankees prospects both traded to the Reds: 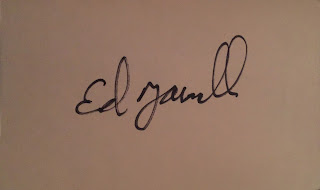 Ed Yarnall was the lefty the Yankees originally obtained for Mike Lowell. That trade looks awful now, of course. But at the time it was pretty even. Lowell didn't have a spot in NY because of Scott Brosius, so he was flipped for Yarnall, one of the top pitching prospects in the game at the time. In fact, he was previously traded from the Mets to the Marlins in the Mike Piazza trade. Obviously Lowell went on to have a great career for the Marlins and Red Sox. Yarnall pitched in seven games for the Yankees and was sent to the Reds for Denny Neagle. A good reminder for us Yankee fans right now...not all top prospects pan out! 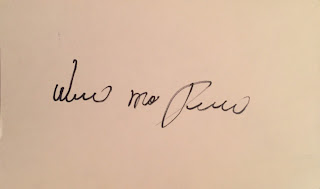 One of the other pieces of the trade for Denny Neagle was Drew Henson. The Yankees then used Wily Mo Pena, autograph pictured above, to reacquire Henson. Pena had a ton of power, and had an ok career. I sent him a bumper sticker to sign as well, but he actually signed the BACK of it. Ooops.

Not a bad batch of autos. Perhaps I'll commission Gavin to make a few custom cut signature cards.
Posted by The Lost Collector at 4:12 PM