I'm not very good at eBay.

I'm dumb and often bid multiple times on something I want, only to end up winning it multiple times. I should just be patient, bid one at a time, and see how it goes.

I had been wanting to pick up an autograph of Hoy Jun Park of the Yankees for some time. He was one of the better players they signed during their 2014-15 International spending spree, and has so far had decent success in the US. He's currently ranked the 21st best prospect in the Yankees system after spending the full season at Low A Charleston.

I originally missed out on a few of his Bowman autos, so settled on this from Panini Extra Edition. 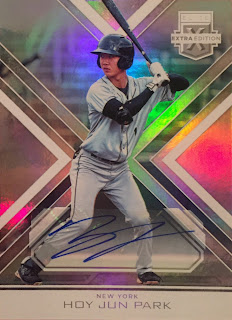 It's fine. It looks better in person, but there isn't a whole lot going on with the card. So of course, the same day I won that card, I ended up as the winner of this: 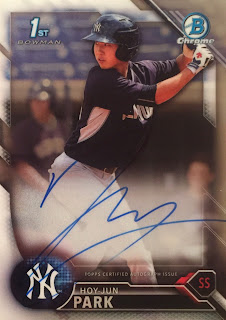 That's more like it! I feel a bit better about owning this one. You'll also notice that each company spelled his name differently, as Bowman goes with "Hoy-Jun" while Panini goes with "Hoy Jun." I'm not 100% sure which is correct, as I've seen several different spellings from the time he was signed until now. MLB.com goes with "Hoy Jun Park," so I'll likely stick with that until I know for sure.

Either way, I'm glad to add not one, but two autos of this exciting prospect, and I look forward to seeing him continue to grow in 2017.