I don't really like complaining about the $4.99 Walgreen's repacks. I know what I'm getting when I buy them...about 95% junk. But usually I find at least get a few fun cards that are worth the price of admission. Rarely can one be chalked up to being a total stinker, but that's what happened earlier this week.

I made the Walgreen's trip to get some milk, and of course checked to see if they had any of these, as they've been out of stock. They had ONE. Seeing all the Harper RCs and other gems being pulled out of these on Twitter, I figured it was a sign I should fork over my $5 and buy it.

I should have known it was a bad sign when this was the card in the window:

Fun fact: Chase Utley still plays Major League Baseball! I had no idea until he announced his retirement earlier this year. This is one of the red/white/blue Prizm cards, and admittedly that looks pretty cool. I like the card, not the player. 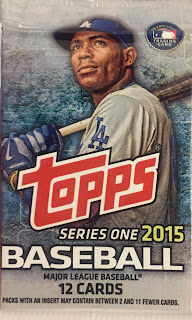 Now I will interrupt the complaining for a second to mention that the best part of the repack was that there wasn't a pack of 2013 Triple Play or 1990 Donruss. It was actually 2015 Topps Series One! That is a massive victory! While I didn't pull anything of note, I'll take my chances every day with a pack like this versus what is usually in there, so I gotta say, that was a welcome change. I just hope the crappier cards I got aren't a result of slightly better packs going in these.

As for the pack, a Yankee and a Michael Morse insert. What a world where Michael Morse was in an insert set just three years ago! 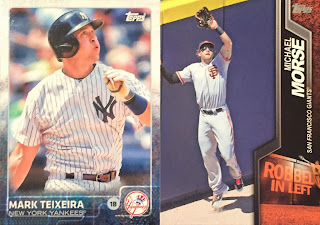 I'm not joking when I say these were the three best cards. I'll always welcome two HOFers for my son's binder.

These other four cards were about the most noteworthy. 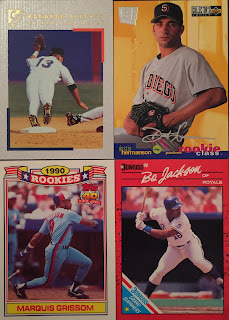 Unfortunately, really nothing else. A lot of 2013 Topps, and none from the team sets like usual. No rookies or oddballs either.

It's ok though! This isn't going to deter me from buying these again. On the whole, they are usually fun and provide some good entertainment value and a few keepers along the way.

However, I just might decide to drive the extra 10 minutes to Target for milk for the foreseeable future.

Posted by The Lost Collector at 9:49 PM

Email ThisBlogThis!Share to TwitterShare to FacebookShare to Pinterest
Labels: Repack