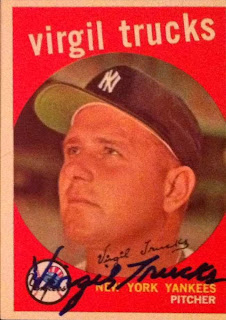 I can't say much that hasn't been said already, but I'd like to pay my respect to Virgil Trucks. As a TTMer, he was probably the most generous signer out there. He signed everything, and always sent a card of his own. More remarkable, he sent personal responses, which shows that he took time to read each letter.

I had two separate TTM successes with Trucks. The first, he signed my 1959 Topps, which now lives in my Topps Yankees Project. The second one was last year. I picked up a cheap, beat up 1953 Topps. I sent that to him, as well as a letter telling him about the recent birth of my son, and he included a signed card for him, as well. 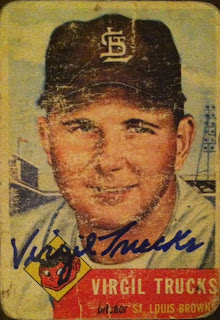 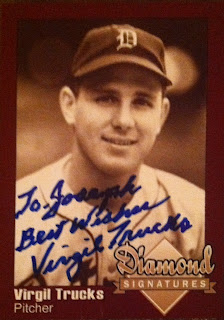 Class act until the very last day.
Posted by The Lost Collector at 9:05 AM