The day after the black-out Super Bowl, I got an email from Ian at All About Cards saying that I had won the random contest drawing in the 3rd quarter. I never win contests, so I was pumped! He said he’s be sending me some goods from the Panini football box breaks.

The package came, and he was right. The cards were gorgeous, and he was very generous with the winnings he sent. More than anything, it made me wish Topps had a legitimate competitor, because
I’d love some baseball cards that look as good as these football cards. Panini has the chops. They just need the rights.

Anyhow, here is an assortment of what Ian sent, including three sweet hits.

The first is this Mark Ingram jersey. The foil border is tastefully done, and the jersey swatch is a decent size, albeit plain. 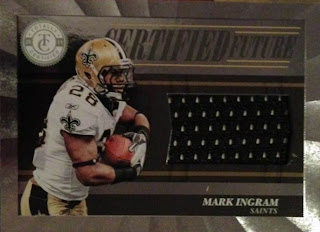 Next up is easily my favorite card of the lot. A clear-cut, green autograph of Dwayne Allen. I put the card against a white background just to show it off better, then gook a photo of me holding it up in all of its see-through goodness. I like the green ink too. In all, autographed clearcuts are pretty damn cool. As someone who collected as a kid in the ‘90s, it brought me back 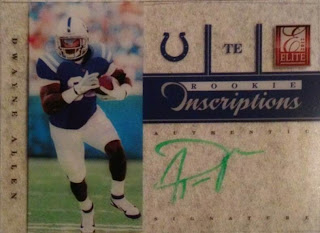 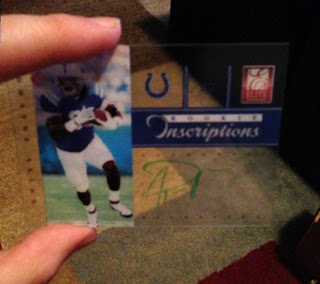 My jaw dropped when I saw this card – a jersey relic of Doak Walker – former Heisman Trophy winner and Hall of Famer. It’s not every day you can get a relic of a guy like that. The swatch is a bit smaller than the Ingram, but I like how it matches the photo. Incredibly cool card to have. 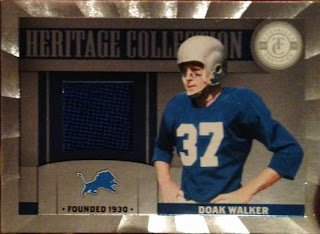 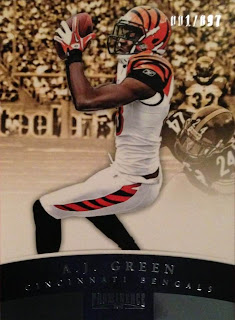 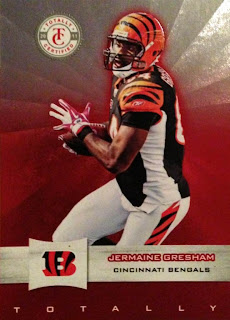 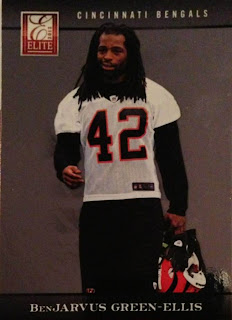 Finally, the last eight cards were the Super Bowl XLVII 49ers team set, which included a card of Colin Kaepernick.  It’s a cool set, and I love the colors and New Orleans theme. 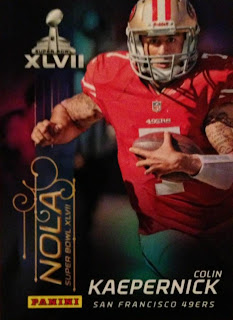 These were fantastic cards to win in the contest, and I appreciate Ian sending them along. Thanks again!
Posted by The Lost Collector at 6:00 PM

Email ThisBlogThis!Share to TwitterShare to FacebookShare to Pinterest
Labels: AJ Green, All About Cards, contest, Panini