Samsonite! I was way off!

I bet many of you know this movie clip:
I'm sure if I watched Dumb & Dumber for the first time now, I wouldn't get it. But the movie came out when I was in 5th grade, and has remained a sophomoric classic for my generation.

In this scene, Lloyd tries to remember the name of the girl he is trying to track down. He reads the piece of luggage, which is obviously from the brand Samsonite. In actuality, the girl he is looking for is named Mary Swanson.

And speaking of "Swanson", my latest TTM success is from a player with that name currently in the Yankees farm system. I'm talking about Erik Swanson!

Swanson was acquired by the Yankees in the 2016 Carlos Beltran trade with the Rangers. He had a great start to 2018 season, dominating AA and earning a promotion to AAA. Currently, he's rehabbing injury at rookie ball Staten Island, much to the delight of Zippy Zappy.

Swanson was kind enough to sign the two cards I sent him back in May: 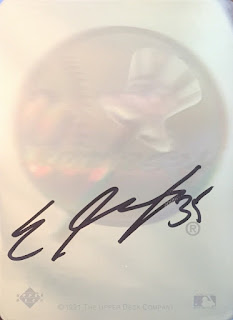 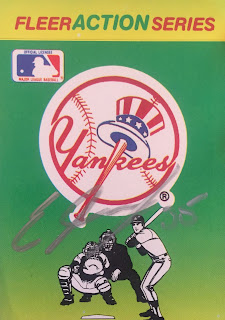 Keep an eye on this guy! Thanks, Mr. Swanson.
Posted by The Lost Collector at 11:55 AM