Yankees first rounder comes through with the TTM success

I was pretty quiet with TTM successes for most of the spring and early summer, but the last week or so has been fruitful with some top Yankees prospects. 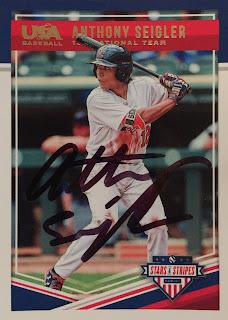 A return from earlier this week yielded me Yankees 2018 #1 pick (23rd overall), catcher Anthony Seigler. He's a very fun prospect who is a switcher hitter AND pitcher. However, the Yankees intend to keep him behind the plate. Seigler was committed to play at Florida, but signed with the Yankees quickly and has started his pro career in the Gulf Coast League.

He's off to a good start as well, hitting .381 through his first 26 PAs. He's dealing with a slight hamstring issue at the moment, but I'm also certain the Yankees are playing it quite safe with their #1 pick.

Overall, an awesome TTM success, and I'm thrilled to get his autograph so quickly into his Yankees tenure.

Posted by The Lost Collector at 8:59 AM