I’m sure I’m late commenting on this, but the Pat Neshek story has me very emotional every time I see him pitch. As a father to a nine month old, I cannot image the situation that he and his wife recently went through.

Below, I’ve included a post that I did last February about a TTM success from Pat Neshek. Based on my math, Pat and his wife probably found out they were having a child right around the time he answered my letter. I actually noted to him in my letter that I had a new son, and asked that one of the cards he signed be personalized to my son, Joey. Pat, being the TTM legend that he is, honored this request.

I know that Pat will be an amazing father one day, but for now my heart aches for him, and hope that baseball is providing him a temporary relief from real life.

Pat Neshek is one of the coolest pro athletes out there, not to mention one of the greatest TTM signers currently in the game. He is an avid autograph collector himself, and if you send him ANY signed card, he’ll send you another signed card of himself. Sorry for the crappy scans below. 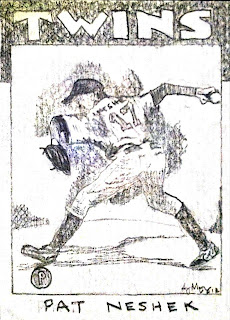 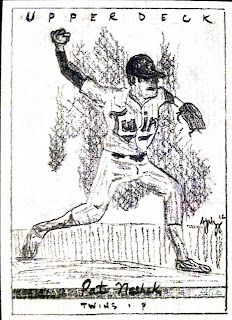 I thought it would be cool to do two sketch cards of Pat. I did one in the 1986 Topps look, and another in the 1993 Upper Deck design. I included a note and asked him to keep one for himself, and kindly sign one for me. He ended up keeping the ’86 Topps and signing the other for me. It looks awesome! It’s very rewarding to have a pro athlete sign my artwork. 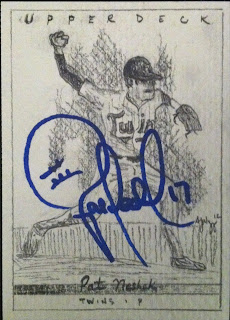 I also sent him a 2011 Topps and asked him to sign it for my son, Joey. Pat was nice enough to do this and even inscribed it. Very awesome! 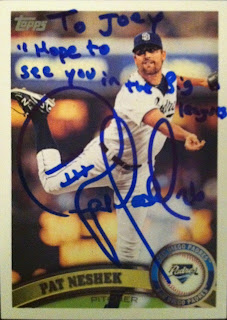 Lastly, I included a few random TTM dupes that I had – no one who was a very big name, and Pat graciously sent me two more signed cards. 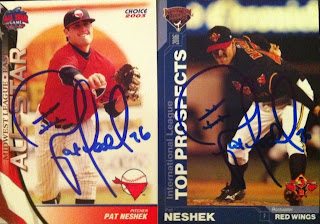 Mr. Neshek is a class act, and I thank him very much for this success.
Posted by The Lost Collector at 9:30 PM 5 comments: