I got home from vacation a couple days ago, and the only card-related mail I had was a single plain white envelope.

The envelope was mysterious. First off, there was no return address listed. Second, it was post-marked from Tennessee. Third, it wasn't addressed to my name, just "Lost Collector."

Hmmm. Not many clues there.

There wasn't a note saying who it was from. Just a business card that said that I've been stacked by the pancake king. 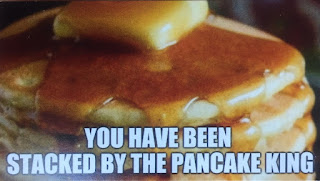 But who is the pancake king?!? 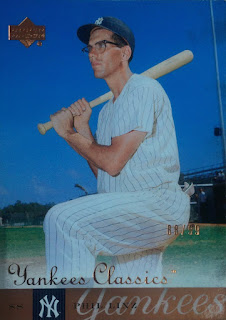 Oh yes, the card that was in the envelope was this Phil Linz Upper Deck Yankees Classic, #'d 88/99. Linz is famous for his harmonica incident on the Yankees bus, of course.

The card is much appreciated, as is the mystery surroundng the card. A few others on Twitter also mentioned they were stacked by the king of flapjacks. Some even speculated that it might be JBF, who isn't too far from Nashville. I'm not ready to concede there though. Not enough clues!

Thanks, Pancake King!
Posted by The Lost Collector at 9:33 AM 2 comments:

A month or so ago, there was rage around 2019 Topps Walgreens yellow parallels. Collectors were driving all over and visiting various Walgreens stores in hope of finding these mysterious $9.99 hanger boxes that made no mention of yellow parallels, yet contained six of them in each box.

I think the buzz around these has cooled down considerably, but it was an exciting chase for a while. Larry from Twitter was kind enough to offer up a few extras he has pulled, and sent a couple my way: 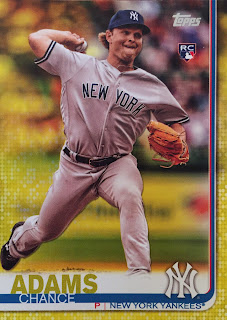 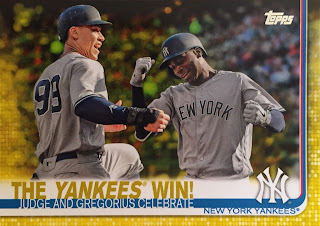 The Chance Adams is cool, and as a great TTM signer, I may need to send his way for an autograph. Plus, any card with Judge on it is awesome!

He was also kind enough to send along a few Yankees that came from these boxes. 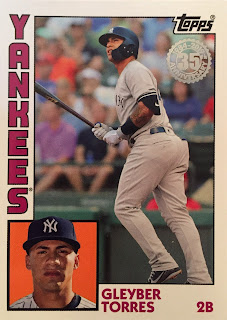 Gleyber Torres is a phenomenal player. He really is. This 35th anniversary card of him looks great! 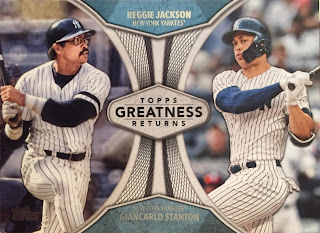 Speaking of "great", I missed these "Greatness Returns" inserts when Topps first game out. Overall, I think they are one of the better looking insert cards found in Topps flagship this year. Stanton has sort of been forgotten this year, but I think he'll play an important part for the Yanks over the summer.

Larry, thanks for your generosity! Make sure to give him a follow here if you haven't yet.
Posted by The Lost Collector at 7:00 AM 3 comments:

A few weeks back, Paul of Scribbled Ink was kind enough to shoot me a 4-card PWE.

The highlights for me were two Tino Martinez cards that were new to my collection. Cards like this show me while I'll always have Tino cards to collect. There were just so many of them made from 1996-1999. It's easy for ones to slip past without even knowing.

I would have definitely thought I had this Score Dugout Collection, and I'm right, I do. However, this is an Artist's Proof, which I definitely didn't have. 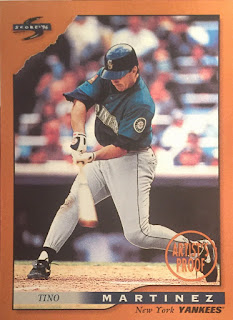 The next is from Donruss Collections, which is like a glossy, embossed version of regular Donruss/Pinnacle cards. But I needed this one too! 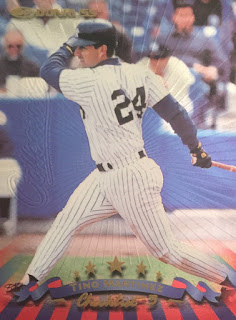 There were also two Aroldis Chapman cards, including this Panini that is numbered to 99. The refractor-like shine and pattern make it look great! 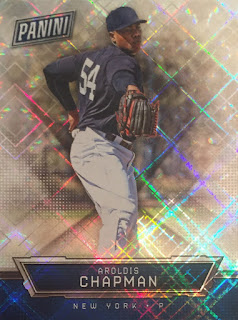 Thanks for thinking of me, Paul!
Posted by The Lost Collector at 9:23 AM 8 comments:

Not to be glossed over

I don't pay much attention to the Topps TBT online exclusives. Just not really in my wheelhouse. But recently, Jason of The Writer's Journey wanted to grab the 6-card release, as long as he could share the purchase with a few team collectors.

After a little but of deliberation, I decided to chip in for the Luke Voit, as I don't have many cards of him. 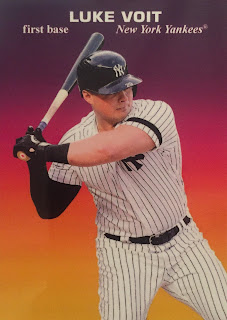 The card itself is pretty cool looking, based off of 1970 Topps Glossy football, which I had never heard of. The actual release had rounded corners, which would have been a cool touch, but I'm guessing Topps On-Demand couldn't do something like this quickly.

It was nice to add another card of Voit, who is now popping up in regular releases, like Heritage and Topps Series 2. At least he is a Yankee card I enjoy pulling, unlike a guy like Chapman (who is in every set and I've never seen anyone actually want to pull one of his cards), or Ellsbury, which is a joke that Topps is still including him in sets. He's not liked and hasn't played since he was a pinch runner in 2017. Enough.

Thanks to Jason for the chance to add a new, unique Voit to the collection!
Posted by The Lost Collector at 8:17 AM 3 comments:

Yesterday, the Yankees signed their 2019 MLB Draft First Round Pick, SS Anthony Volpe from Delbarton School in nearby Morristown, NJ.

Volpe is someone who comes with great makeup, although reports were divided on if he was worthy of the 30th overall pick. Obviously the Yankees have had a chance to see him up close and personal in their own backyard, plus were doing double duty scouting his teammate, Jack Leiter.

He was committed to Vanderbilt, but I'm sure the Yankees had an idea they'd be able to sign up before committing their first pick for him. The Yanks have a bit of a history with reaching for high schoolers in Round 1, so hopefully Volpe turns out to be a franchise cornerstone. 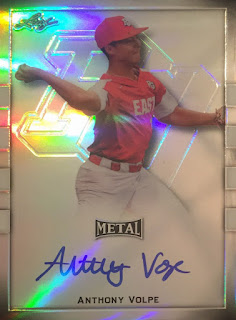 On Draft night, I was able to snag this autograph of Volpe. I think I actually got it before the pick was official, as the Yankees connection to Volpe was really heating up. As Zippy Zappy's excellent post showed, a lot of these first round picks already have cards by the time their names are called. An on-card autograph of a Yankees first rounder was just too hard to pass up.

Posted by The Lost Collector at 8:49 AM 2 comments:

A unicorn is spotted in Michigan

A few weeks ago, I noticed that Ty Hensley was no longer on the roster of the Evansville Otters. There was a press release over the winter that stated he was returning this year, so I was concerned he was once again injured.

A few weeks went by, and it finally popped up in my newsfeed that Ty had signed on with a new independent league team, this time the Utica Unicorns of the United Shore Professional Baseball League.

I was unaware that Utica, NY had a professional baseball team, as that was the only Utica I know. A quick browse of their website shows that I'm incorrect, as this team is based in Utica, MICHIGAN, just outside of Detroit.

Here's Ty in his new duds, courtesy of the Unicorns' website: 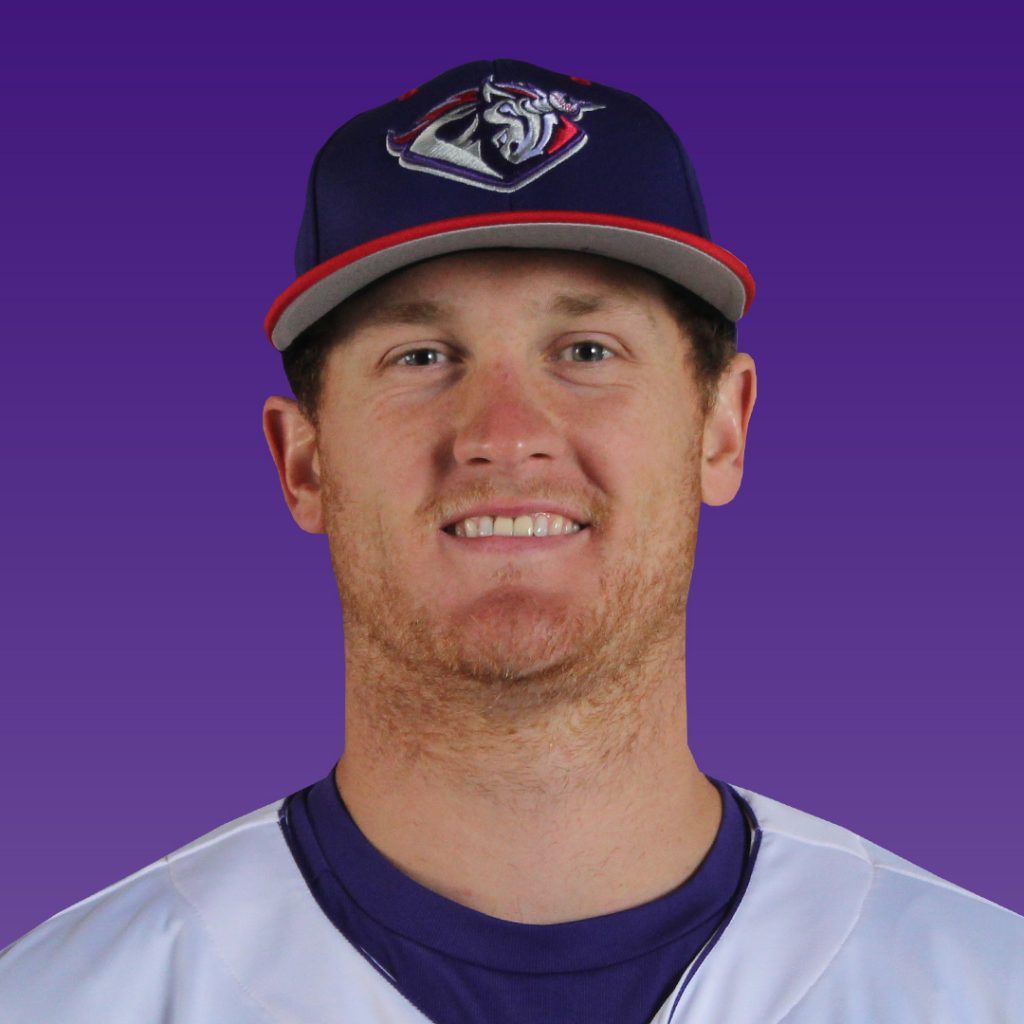 I wish Ty nothing but the best this year, and hopefully he has a successful season. I'll be sending some cards his way to Utica to distribute to his new teammates and local fans, although I think with independent ball it's quite hit or miss as to whether or not mail is actually delivered to players. Hopefully he gets it!

So far this season, Ty has appeared in four games, with a save and 16 Ks in 10 IP. Nice numbers there! Maybe he'll dominate out of the pen and an organization will give him another shot! 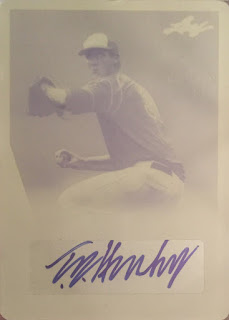 Just yesterday, my 116th different Hensley arrived, yet another 1/1. This is a 2012 Leaf Memories yellow plate, with a sticker autograph obviously attached.

Posted by The Lost Collector at 9:04 AM 5 comments:

As many know, tonight is the first part of the 2019 MLB Draft.

It's a pretty weird event. In the NFL, Kyler Murray went #1. Most interested fans had seen him play at Oklahoma, taking home the Heisman. In the NBA Draft in two weeks, Zion Williamson will go #1. Again, a household name after his larger-than-life season at Duke.

The MLB Draft, while much more mainstream than in the past, is 40 rounds of guys you've mostly never heard of. There are times when that's not quite the case, like when Bryce Harper and Strasburg were drafted. But for the most part, it's a lot of unknowns to a more casual viewer.

The first pick tonight is owned by the tanktastic Orioles, and most believe they'll take Adley Rutschman, a catcher from Oregon State. By all accounts he's an excellent player, but outside of a few appearances on ESPN over the last couple weeks, I doubt most have heard of him.

One cool thing about the MLB Draft: bloodlines! In the first round alone, we'll see Bobby Witt Jr taken, and possibly Jack Leiter, son of Al.

Regardless, I'll still likely tune in around the time the Yankees are on the clock at #30, and hopefully one of the highly ranked players find a way to fall to them. And just a side note, #30 is where Ty Hensley was picked in 2012!

All this rambling just to show a card of the Yankees 2017 first rounder, Clarke Schmidt: 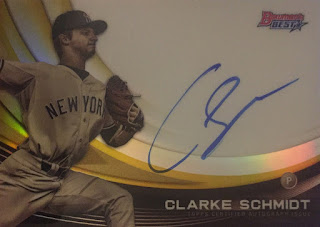 Schmidt has been good to very good when healthy, but finds himself on the IL for the second time this season. I can't seem to find an explanation. The first time wasn't arm related, as he was sick. Still, his last outing showed why he was a highly touted player, firing 6 innings, allowing three hits, and striking out nine back on May 20. If he can stay healthy and put together a few solid outings in a row, he should find his way up to AA later in the summer.

Big IF when it comes to Yanks draft picks though.
Posted by The Lost Collector at 8:42 AM 4 comments: