Daniel over at "It's like having my own Card Shop" is holding a contest with quite a few ways to enter yet. It's entirely possible I missed it, but I'm not sure if anyone has taken him up on "create at least five events for a baseball card Olympics, so I decided to enter his contest under that topic.

Here's what I have, although I'm sure you all might have others and feel free to leave more ideas in the comments: 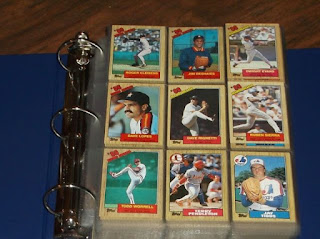 Each Olympian will have a 792-card Topps set dumped in front of them. The participant who can not only correctly order there set, but then binder it, will be crowned the champion of this maddening event!

A few days ago, I was flipping through some 2012 Topps card, and I found a Pablo Sandoval SP that I didn't know was in that pile. I probably missed it the first time around. Spotting an SP can be a skill, especially if one doesn't take the time to check those itty bitty number codes on the back. This would test a contestants eye, as well as knowledge of a product.

Stacking is always a fun event. There's such things as cup stacking, and even Oreo stacking, so why not card stacking? Highest stack takes the gold.

A referee will open packs of junk wax cards, and without seeing the names, each Olympian must correctly guess each player. Last person standing wins. 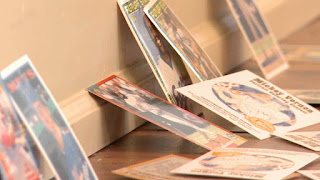 Going back to the roots of what our dads all did with their Mickey Mantle cards, some good old-fashion card-flipping for Olympic glory.

Exactly how it sounds! Without being given any other hints, contestants much correctly guess from a series of autographs, with each one become harder...and scribblier...than the previous.

So what awesome events did I miss for the Baseball Card Olympics?
Posted by The Lost Collector at 8:03 PM 4 comments:

Email ThisBlogThis!Share to TwitterShare to FacebookShare to Pinterest
Labels: contest, It's Like Having My Own Card Shop

Yesterday, after a day trip to see some family, I came home to find this in my mailbox. 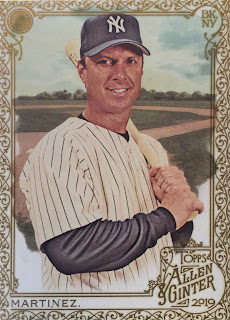 Oh yeahhhh! It's my first 2019 Topps Allen & Ginter Tino Martinez. I bought this earlier in the week, and it arrived very quickly, in a PWE to boot (free shipping on a cheap card, totally cool).

This is the gold foil parallel, found in "hot boxes." I don't know what a hot box is, and don't really feel like looking it up. I hope that these just show up one per pack or something in a hot box. I'd be annoyed if I bought a box and all the cards had this gold border around them.

Overall, I like the photo and the old times background. I'd really like to know when this photo was taken. It definitely was not Tino's first NY stint (1996-2001). It could have been from his final Yankees season, in 2005. But it just doesn't seem right. He looks a little older and thicker. It honestly might be from the last few years when he served as Yankees guest instructor at spring training. Just a theory, I don't know for sure.

Here's the back. Pretty standard. 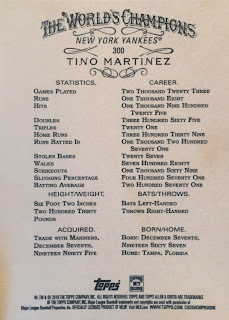 Looking forward to a few others rolling in!
Posted by The Lost Collector at 8:12 AM 4 comments:

Call to the Hall

This weekend, three former Yankees will enter the Hall of Fame. While I don't anticipate sitting and watching the ceremony, I do look forward to seeing video recaps of the speeches and all the pageantry. I've enjoyed seeing photos of each player's Hall display as well.

After he was unanimously selected as a HOFer, I did pick up these two Topps NOW issues, with the latter celebrating the feat. I need more Rivera cards like I need a hole in the head, but these were two I was very happy to add. 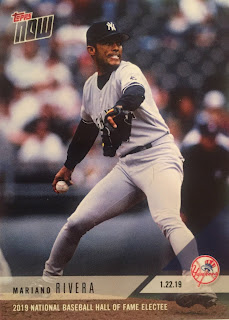 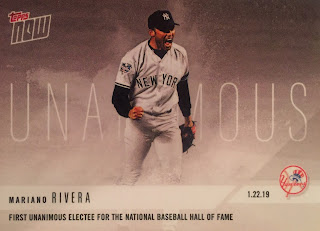 I never owned many Mike Mussina cards during his playing days, as his Yankees years coincided with mostly my non-collecting years. Still, I've amassed quite a collection of his through trade packages, and his TTM autos are some of the best I own. I actually do remember the Yankees getting Lee Smith via trade, even though I was nine at the time. I remember watching a game on WPIX where they zoomed to him sitting in the bullpen. I can't say I remember any of his Yankees pitching appearances, but it's always fun when a guy like this wears pinstripes for a short time. 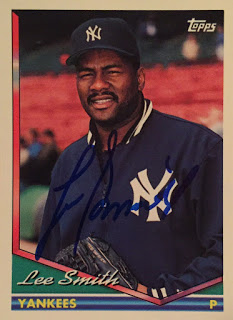 Congrats to these three guys, as well as the other elected players.
Posted by The Lost Collector at 8:08 AM 4 comments:

While I wait for Ginter...

As I'm anxiously awaiting my first look at the 2019 Allen & Ginter Tino Martinez, that didn't stop me from bringing in a new Tino to my collection. Although it's 17 years old, indeed it's one I needed.

Fleer slash Skybox put out a few interesting sets, and one of those was the EX brand. I always sort of liked them, as they had an acetate-type feel for them, and often had all or a portion of the card as clear cut. I love clear cuts.

While I have several copies of the base card, this is an instance where I had no idea that a relic existed. Truth be told, it looks like Fleer had some leftover bat pieces laying around, and essentially just cut out a weird shape on the base card and found a place to stick a bat relic. It's not integrated into the card particularly well. 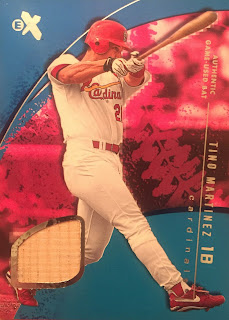 I had never seen it until it popped up on eBay, and with just 43 copies made, that's not surprising. While perhaps not low by today's standards, during this time it was low.

Posted by The Lost Collector at 8:27 AM 4 comments:

Yesterday, I took a quick peek at the 2019 Allen & Ginter checklist that was released by Topps. A&G is by far my least favorite set each year, even more than Big League, but I did want to see what Yankees were in the set. I was glad to see that Adam Ottavino is included, for example. And equally happy to see that there was no Jacoby Ellsbury card. For some reason, Topps still seems to think Yankee fans want Ellsbury cards. I can assure you that, even for the season he was healthy, no one did.

I don't know if this is certain, but my hunch is that Tino didn't have a Topps contract for awhile, but that has changed. For starters, he was left out of 2017 Topps Home Run Derby Champs insert set. How else can you leave out the undisputed 1997 Derby champ?!

I'm sure many non-Yankee fans will gripe. Why do we need to keep seeing El Duque and Paul O'Neill in our sets?! Because Topps makes money from old dudes buying cards, and including more Yankees = more sales. Simple really. Tino isn't a star, and is probably better reserved if another "Fan Favorites" set ever comes out. Regardless, I don't care what others will think, especially with some of the garbage that is usually included in the A&G checklist. If Tino takes the place of a base card of a hot dog eater or an entrepreneur, then I am for it. Many find those cards charming. I find them annoying.

Side note - I do enjoy the look of A&G. That's never my issue. And they look great signed! They serve as excellent TTM fodder. Like this: 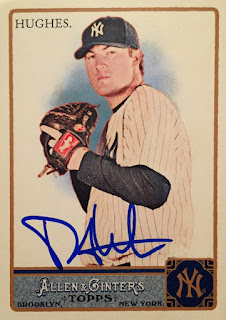 Anyways, I'm wondering if this will start a run of Tino being included in various Topps sets. He was a redemption in 2019 Bowman for the 30th anniversary buyback autos, and now has a base card in A&G. It wouldn't surprise me to see him start popping up in Archives and the likes.

Will it make me buy more Ginter? Well, I'll probably buy a blaster because it'll be fun to pull a Tino from a pack in 2019. So, in short, yes. But I won't go overboard, as I'm sure a few copies will find their way to me even if I didn't buy a single pack.

But at least this did one thing: got me excited about a 2019 release, which is saying something.
Posted by The Lost Collector at 8:44 PM 6 comments:

Put me in, Coach Tom

Our resident hobby high school baseball coach, P-Town Tom, hit me up with a nice care package the other day. Tom is a very thoughtful guy, and tends to always check off multiple boxes when sending a package. This one was no different, as he hit three areas of my collection in one swoop:
Let's start with the Tinos. I needed this Flair! It's a pretty awesome card, even though this set was confusing with the Class/Row/Seat designation. Just a fancy way to say "parallel." 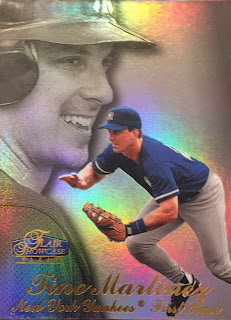 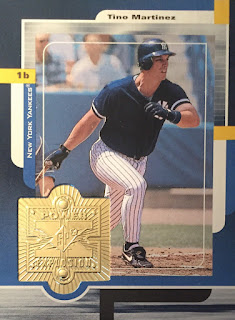 I also enjoyed this SPx Power Explosion card, even if it is a dupe for me.

Next up, the Rizzutos! This TCMA is awesome, and I love the classic top-step-of-the-dugout shot. 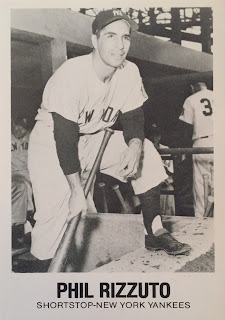 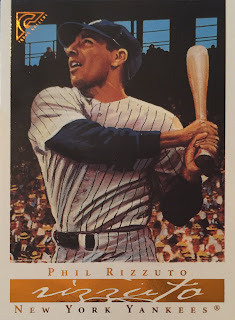 I also thought this Topps Gallery was very classy looking, and even thought the scripted font design element looked a bit like this: 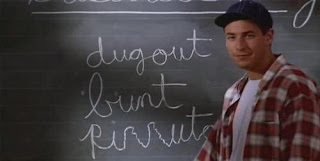 While I've been bad about showcasing and keeping up with my son's HOF binder, I do still actively add to it, and will make sure these cards are added: 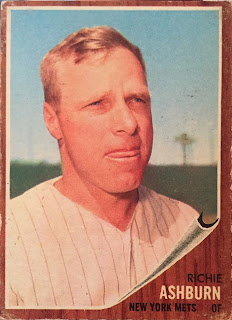 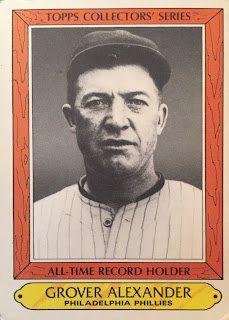 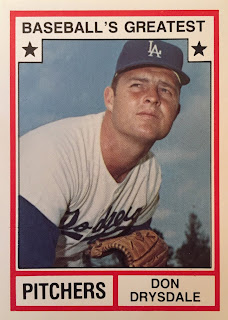 While certainly not known for his time with the Mets, the Ashburn is a great addition to the binder!

Tom threw in a few other Yanks for me, highlighted by this UC3 Mattingly. Great shot of Donnie hustling and playing the game hard, as he always did. 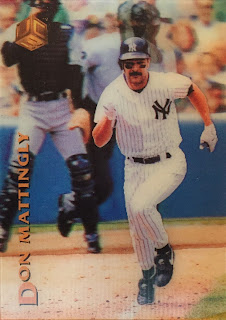 Thanks for thinking of me, Coach!
Posted by The Lost Collector at 9:36 AM 4 comments:

No, I'm not talking about this when I say Blue Chips, although it was a great movie and a very awesome card set. 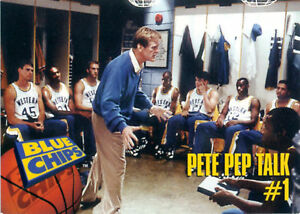 I'm talking about Topps Finest Blue Chips. I never had any of the originals back from 1997 - they were one of those fancy sets I saw images of in Beckett, but never would be able to add to my collection.

As part of 2019 Finest, Topps rolled Blue Chips back out, and I sprung for the Gleyber Torres: 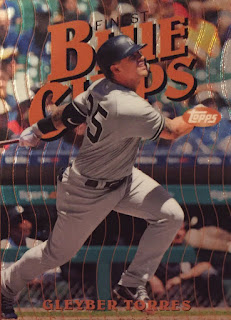 Napkin Doon and I were just chatting the other day on how Gleyber Torres seems a bit underpriced right now. In the world of young players like Acuna and Vlad Jr and Wander Franco, Gleyber seems a little forgotten as an "older player." And by older, he's 22. 22! And hitting .295 and is on pace for 35-40 HRs as a middle infielder...who is 22!

I'm not quite sure what it is. He's still collectible and I wouldn't say his cards are cheap, but on his own team falls second to Judge, and perhaps the fact that he isn't as homegrown of a Yankee holds some back since he was acquired in a trade. Or the fact that his name is Gleyber, which is pretty unusual sounding? I don't know. All I know is he's a star, he's getting better, and he's twenty-freakin-two.

Regardless, his RCs are very affordable right now, as are sweet cards like this. And he deserves to be an elite player in this hobby, just as he is on the field.
Posted by The Lost Collector at 9:51 AM 1 comment: