Growing up, I always loved Upper Deck Collector's Choice. They came out when I was in around fourth grade, and they were an affordable product from Upper Deck, so I naturally liked them. They were geared towards younger collectors - a lot of flashy colors and inserts. I really like the foil wrappers too and I remember exactly how it felt to open a pack of these. I also collected basketball cards at the time, so between these two sports and I had a good amount of Collector's Choice cards.

Every year, they had some sort of one-per-pack insert. Early on, it was Silver Signature cards. Then it moved to You Make The Play game cards, followed by Star Quest. I never quite understood Star Quest, and they tried making the inserts tiered into single, double, triple, and home run categories. It got a little confusing. 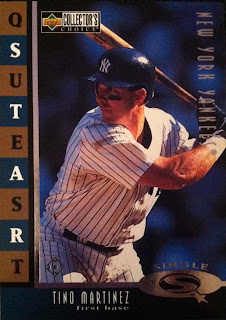 As for the design, the 1998 Star Quest cards were not my favorite. The lettering on the side of the card is weird...does it say "Star Quest" or "Quest Star"? I'm not sure what the small baseball diamond above Tino's name has to do with anything. I do appreciate them spelling out "single" - just so that there is no guesswork involved in which tier card this is. 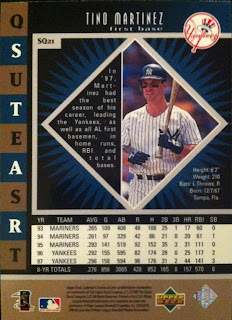 The back is so-so. For an insert, I don't mind five years of stats. The nugget of text is informative for only being one sentence long. I like that there is a picture of him on the back as well.

Overall, not one of my favorite Collector's Choice card, but I don't overly dislike it either.
Posted by The Lost Collector at 8:30 AM No comments:

Does anyone have any 2011 Donruss Elite? 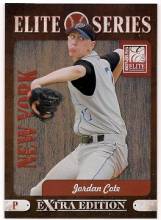 I know it wasn't a mainstream set at all - and usually isn't - but I am wondering if anyone busted any 2011 Donruss Elite Extra Edition? I'm looking for the following cards:

Let me know if you have these and are willing to trade them. Thanks!
Posted by The Lost Collector at 9:04 AM 1 comment:

Mmmm, Denny’s on a Sunday morning. What’s better? Well, maybe Denny’s at 3am after a night of drinking. Or maybe just IHOP in general.
Anyways, Denny’s was awesome growing up because they always had baseball cards. They were always cool too – either a hologram or a sportflix-type card. Yeah, you only got one in a pack, but that made it all the more special and easier to pull someone good. Plus my grandmothers and their friends always ate at Denny’s after their bowling league, so I would end up with a few packs at once. 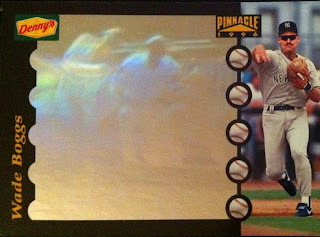 These cards pop up on eBay from time to time. Sometimes they are unopened packs. Other, just singles. Rarely do they go for big bucks, so I occasionally bid. I won this particular card for $.23 shipped. It’s a 1996 Pinnacle Denny’s Wade Boggs. I believe in the years before this, Upper Deck produced these cards. This particular card is not only a hologram, but when you turn it Boggs actually swings! Mind-blowing stuff.
Posted by The Lost Collector at 9:30 AM 2 comments:

While late-night surfing eBay on my iPhone in one hand and feeding the baby in the other, I came across an ARod SportFlix rookie. I remember being very envious of a friend of mine who had this card growing up, so I put in a bid of $.55 shipped and won it. I don’t need the card for a collection and I only casually collect ARod to begin with, so this was more of a card that I felt like I owed myself from my childhood. For two quarters and a nickel, it’s worth it. 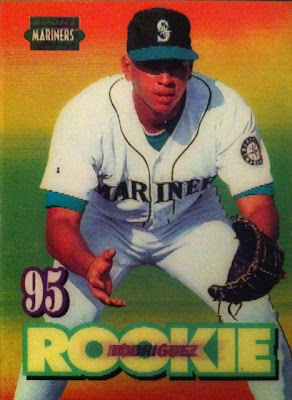 Posted by The Lost Collector at 9:00 AM 3 comments:

I don’t own any Jeter relics. I haven’t been fortunate enough to acquire a Jeter jersey card or bat relic. I’m not sure if I’ll ever own a Jeter auto. However, I do now own a relic card…just not Jeter’s clothing or bat. It’s a piece of game-used base from the 1999 World Series. 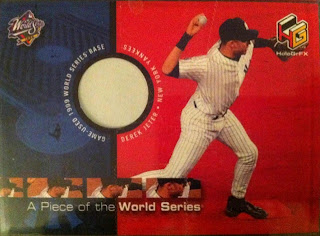 I‘ve been trying to slowly collect this 11-card set. I now have four cards to go, but I think Jeter was likely the toughest to acquire. I ended up winning it on eBay for $13.01 shipped. I figured it would have cost me at least $20, so that was a great deal in my opinion.
I really do love this set. Sure, the Yanks won the World Series, but I still think it’s a really attractive design and a cool concept for a set. If anyone has one of the cards I don’t have (Clemens, Bernie, Brian Jordan, Glavine) please let me know. I do have a duplicate Andruw Jones from this set as well.
Posted by The Lost Collector at 8:30 AM No comments:

I really haven’t sent many TTM requests out lately at all, so it’s always surprising to see a little white envelope waiting for me when I get home from work. It was post-marked from North Houston, so I couldn’t figure out who this was until I opened it. Yankees prospect relief pitcher Kevin Whelan signed my 2008 Tristar Prospects Plus. I’ve said it before and I’ll say it again…I love these cards and they are just begging to be signed. This card looks great. 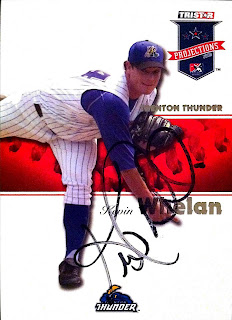 I sent it to Kevin in June when he got called up by the Yanks, so it looks like he is getting to his mail in the off season. Unfortunately, the Yanks just designated him for assignment today. Hopefully he gets a shot with another team.

Thanks, Kevin!
Posted by The Lost Collector at 9:00 PM No comments:

I recently stumbled upon a new, unique sports artist and I wanted to share his work (with his permission). As you know from reading my blog, I’ve done a few Yankees paintings and several original trading cards – either painted or sketched. Links to my Derek Jeter and and Mariano Rivera painting can be found HERE and HERE.
On Twitter, someone I follow retweeted a Victor Cruz painting that artist Dave Choate did. I started following Dave, and he immediately posted a new painting, again with NY Giants players as the subject. Very topical indeed with NYC being swept away with Giants Fever. I then visited his website and found an amazing assortment of paintings, all in Dave’s incredibly unique style. I spent a good portion of my morning at work browsing the site and admiring Dave’s works. Essentially, his subjects are sports charactures (like 1938 Goudey baseball cards), but a bit abstract as well. I tend to paint/draw in photo realism and try to make my paintings look as life-like as possible. Dave’s are more from a fantasy world, as he describes them as "whimsical" on his website, which is a great word for his style. I really appreciate artistic styles outside of my own, and as much as I would like to step outside of my comfort zone, I don’t have the creative eye or mind to do something as free-thinking as Dave’s works. I am too literal and narrow-minded. I don’t say that as a personal jab at myself, but as a compliment to artists such as Dave who can really create a style that is truly their own.
Despite the whimsical nature of Dave’s works, he still manages to capture the facial expressions and traits of each of his subjects. You’ll know immediately who each portrait is of – there is no guess work involved. Just look at Nadal and Djokovic above.
Dave is certainly making a name for himself in the sports art industry. World Series winner Jason Motte is a client, and Carmelo Anthony is purchasing the Mike Tyson painting below. Not only is ‘Melo my favorite basketball player, but he went to Syracuse when I was there, so that made my day when Dave told me that. I can’t imagine ever getting to the point with my artwork where someone (especially an athlete!) would actually be interested in purchasing it. That must be incredibly gratifying for Dave.
I encourage everyone to go and check out Dave’s work at www.davechoate.com. You can also follow him on twitter @DaveChoate. You won’t be disappointed.
A special thanks goes out to Dave for his permission to feature his website and paintings on my blog.
Posted by The Lost Collector at 7:30 PM 2 comments:

A difficult decision every collector faces 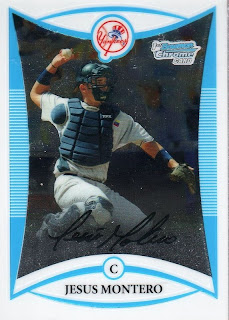 We’ve all faced this at least once. A favorite player gets traded or signs with another team, and we are left pondering how to move forward with a player collection. There are players, such as Albert Pujols, who have spent years with one team and then switched, leaving his collectors with the dilemma of continuing to collect him on a new team, or to jump ship and focus on someone else.
I’ve faced this issue once before with Tino Martinez, although I didn’t start collecting him until he came to the Yankees and already he had about six years worth of Mariners cards out there. After six seasons in NY, he signed with St. Louis and eventually made his way to Tampa Bay and then back to New York. I made the decision to continue collecting him despite playing for the Cards and Rays. I don’t pursue those cards as aggressively as his Yankee cards, but I don’t turn them down either.
I started a Jesus Montero collection not long ago, if you can even call it that. My collection is only 14-15 cards deep…that’s nothing compared to those of you have that hundreds of Pujols cards. I didn’t put a ton of resources into it, but I did make a few trades and actively search eBay and SportLots. Since he played all of one month with the Yanks, I have decided that I will not keep collecting his cards. No need, as all of his big league cards (minus 2012 Topps Series One) from here on out will be in a Mariners jersey. I’m not sure what I’ll do with his other cards that I own. I’m sure I’ll keep a few of them, especially his Bowman Chrome RC. The others, maybe I’ll trade or bundle as a lot and sell them once he hits 30 HRs his rookie year.
It’s also a lesson in prospect collecting. I love collecting propects. I’m not sure why. I like writing to them and collecting their TTM autos (I was about 0 for 100 on Montero). I like following their development. However, there is always the risk (especially with the Yankees) of being traded before they ever make an impact at the big league level (that is, if they ever make an impact at all). I’ve been humbled a little by this deal, but I won’t be stopped. I’ll keep collecting Gary Sanchez and Manny Banuelos and Mason Williams, knowing full well that at any moment they can and will be used as a trade chip.
I won’t be replacing Montero with an another prospect for now, unless someone like Jorge Campos, acquired in the deal, finds his way into a few minor league sets this year. That will be appropriate. For now, I’ll be removing Jesus from my “Current PC’s” page, and will continue to wish him well and the best of luck in Seattle. Just not when he plays the Yanks.
Posted by The Lost Collector at 8:30 AM 8 comments: