I probably wouldn't have believed you if you told me during spring training that Aaron Judge would join the 50-HR club this season. I've seen many Yankee fans say they would have been happy if he hit .250 with 25 HRs. By all accounts, that would be a very successful first full campaign.

But to hit 50 and break Mark McGuire's (j/k, I know it's McGwire, but it's been funny seeing how many people have misspelled his name on Twitter over the last day) record? I wouldn't have thought.

And on the flip side, to have Cody Bellinger break the NL rookie HR record as well? Quite the feat for the young sluggers. Juiced ball or not, it's an impressive accomplishment.

As I've previously mentioned, I've been a bit addicted to adding Aaron Judge Topps NOW cards. However, my one complaint is how many of them look exactly the same.

That's why I liked this one from Citi Field, honoring a blast he hit there. Most of the time, the cards are a close up of the at bat, but I like mixing it up a little. 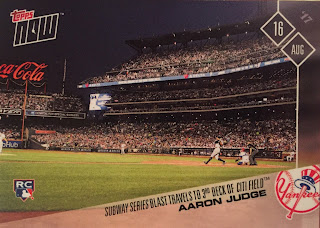 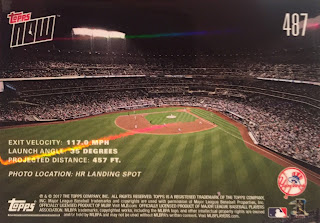 I'm sure today's card featuring his 50th will be a close-up of the at bat, but I'd love it if it were the curtain call he received after breaking the record.

Here are a few more Judge's that have come in over the last few weeks. Not much variety, but I'm still glad to have them. 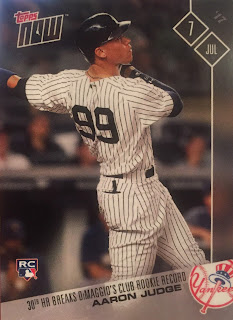 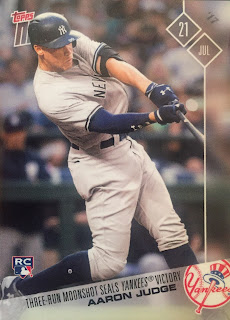 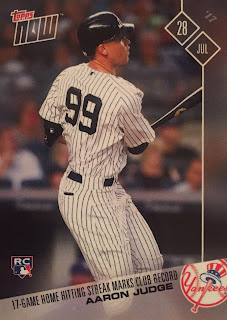 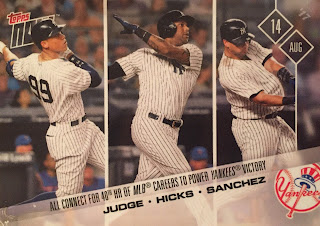 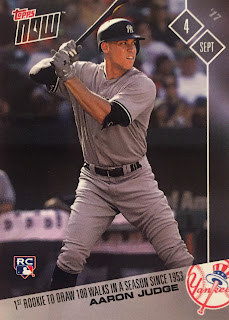 Congrats to Aaron on his historic season!
Posted by The Lost Collector at 8:41 AM 7 comments:

I received a surprise envelope earlier this week from Kin of I Feel Like a Collector Again, and from the well-known Twitter handle @beansbcardblog.

I actually have a few Russ Davis cards to send his way, but he struck first and sent me this beauty that I didn't have. 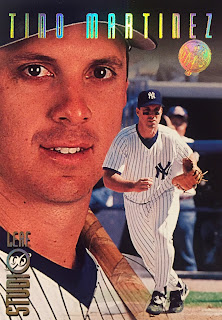 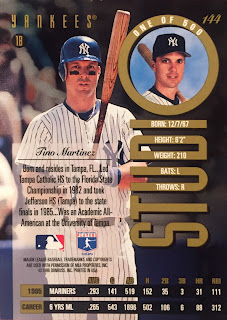 That, my friends, is a '96 Studio Gold parallel. Kin told me that card had resided in Texas for the last 20 years or so, and I'm glad it has finally made it's way up to New Jersey as the newest card in my Tino collection.

Thanks so much, Kin. Please give him a follow on Twitter and check out his blog.
Posted by The Lost Collector at 7:07 AM 7 comments: 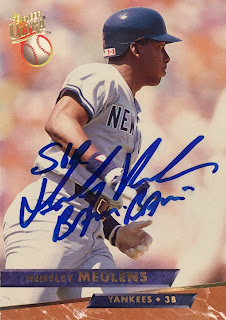 There are some guys that are nearly automatic TTM signers, yet for whatever reason, I have had trouble getting a response from them. Two of those guys are currently with the San Francisco Giants - Hensley Meulens and Dave Righetti. I have sent both multiple requests, without success.

I can finally check off Sir Hensley Meulens, as he returned my three cards signed over the weekend. I sent these in July, so about two months time. 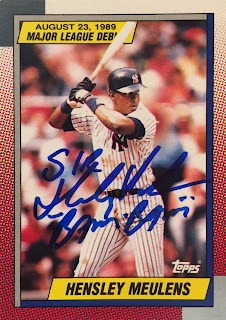 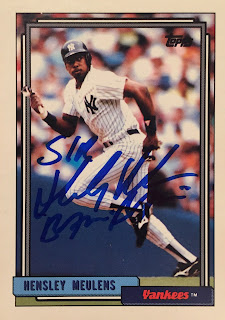 Meulens was a big prospect for the Yankees, although never really transferred his minor league success to the Majors. He played for the Yankees from 1988-1993, then with the Expos in '97 and the D-backs in '98. Can't say I recalled him playing for the latter two teams. He played in Japan from 1994-96.

Since 2010, Bam Bam has served as the hitting coach for the Giants.

I'm happy to have these back, and hope I can add Righetti soon too!
Posted by The Lost Collector at 5:00 PM 6 comments:

Eye of the beHolder

I don't have a ton of outstanding TTM requests not, so it's always kind of fun when an envelope with an older stamp makes it's way back to me. For the second time in a week, I had a spring training request returned to me. 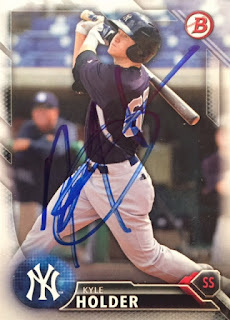 I sent this to Kyle Holder back on March 6, so this took a little over six months to come back signed. I definitely appreciate getting it back, even with the long wait.

Holder, a 2015 First Rounder, spent the entire season at High A Tampa, hitting .271. He doesn't have much power at all, but he's already MLB-ready in the field at shortstop. He also logged 26 games at third and 14 at second, showing that he can move around the infield.

With his glove, if he can keep hitting .270ish, he'll find a role as a utility man in the Majors at some point. I'd assume he'll move on up to Trenton to start next season.

Thanks for the autograph. Mr. Holder!
Posted by The Lost Collector at 6:47 PM 1 comment:

It's always surprising when someone reaches out via email or Twitter and wants to send me (or my son) some cards. This happened recently on Twitter, when Jonathan from @ABucnCaniac sent me a DM offering to send a few HOFers for Joey.

It was very generous and appreciated. Here are the cards I've added to Joey's HOF binder. I still have to ingrain it in my brain that Biggio is a HOFer. 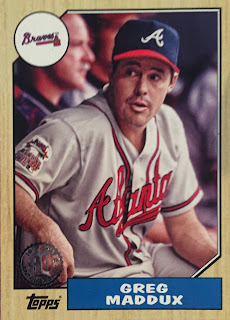 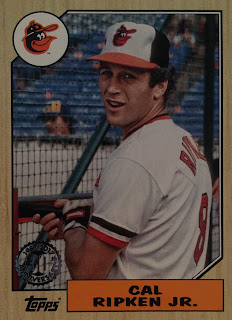 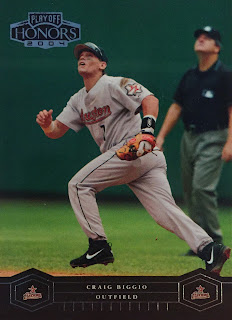 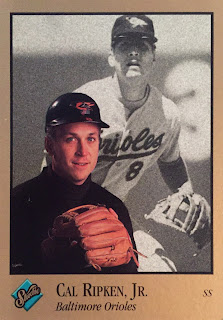 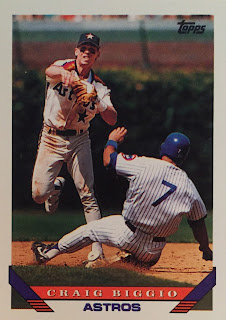 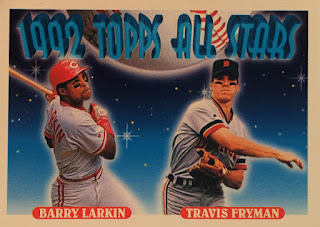 Jonathan also included a few Yankees for me, including this Jeter insert. I better snag it for myself before I have to add a bunch of Jeters to the HOF binder in a few years. 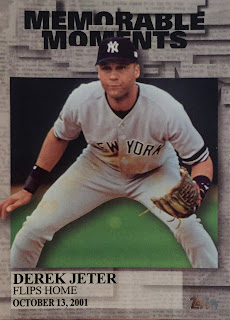 Thanks so much, Jonathan. Go give him a follow at @ABucnCaniac.

I'm not a weekly poster, I promise

I don’t plan on being a once-a-week blog poster. Truth is, after we got my daughter home from her 7-day hospital stay, that very night I woke up with a 103+ fever. Allow me to be a baby, but fevers as adults completely suck. This just floored me until overnight Friday, when my fever finally broke, and still spent most of the weekend recovering. Boo hoo me, I know. Not looking for sympathy, just saying that I had zero desire to pound out a blog post, even one as simple as this.

Regardless, one of the days shuttling between home and the hospital, a SASE returned to me. I was surprised to find this: 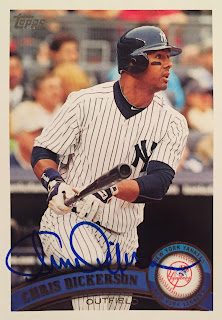 A Chris Dickerson autograph! Although it got a little mangled during transit.

I didn’t remember sending it out, and upon checking my records, I sent the request to Orioles spring training in mid-February. Nice to get one of those ones back!

Dickerson spent the season in Norfolk, the Orioles AAA franchise. Already 35 years old, hopefully he gets another shot in the Majors one day.
Posted by The Lost Collector at 10:34 AM 7 comments:

Not the best end of summer

This post comes to you from the pediatric ward of our local hospital, where my three-year-old daughter has been since Wednesday. She has pneumonia. I feel so bad for her little body going through all of this, and feel terrible that summer is ending this way for her. I feel for my son too, as he's been dragged back and forth to the hospital and hasn't gotten much attention.

She'll be ok and we'll survive! There are a lot of people going through their own challenges right now, especially my blogging friends down in the Houston area. I wish them all the best.

I will say that I've been trying to keep up with everyone's blogs, as there is a lot of downtime just sitting here, so thank you all for your posts.

In between some of my trips home for clean clothes and to walk the dog, yesterday's mail contained just a single card: 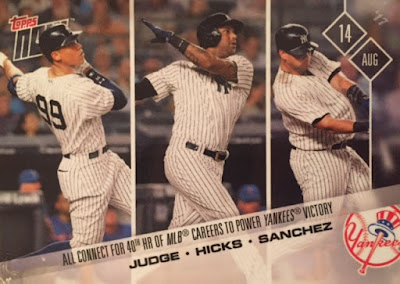 This was a pretty neat feat, actually. All three players hit their 40th career homers in the same game. While 40 isn't an elusive number or anything, what are the chances three guys on the same team would accomplish the feat in one night?

Hopefully I'll be back with normal posts soon. Until then, I hope everyone can enjoy their holiday weekend!
Posted by The Lost Collector at 1:55 PM 8 comments: