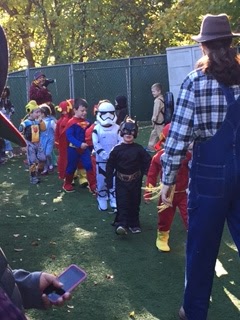 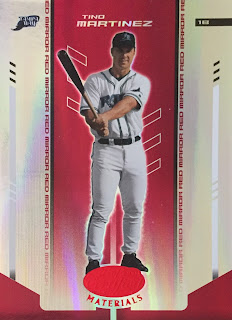 Not all Yankee fans are bad

A few weeks back, Judson of My Cardboard Habit asked me on Twitter if I minded sticker autos. Of course not, I said. While I prefer on-card (who doesn't?), there are plenty of places for stickers in my collection.
He agreed.

That was followed up by an email that simply said "It's coming" with a collection of numbers. Those numbers, of course, were a tracking number.

Fast forward a few days, and this card showed up: 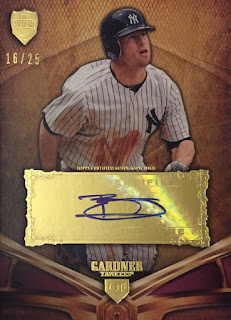 Whoa! Now, as you'll see in my most-wanted section on the right hand side of my blog, Brett Gardner is an autograph that I didn't have in my collection, and really wanted. He's been a very good Yankee since 2008, one of the few that has actually had an impact from the horrid drafts of the mid-2000s.

I'm not sure why I didn't have his auto. I guess they aren't that easy to come by, and he doesn't sign TTM. So it just sort of escaped my collection. Until now.

However, that's not all. Equal to the kind gesture of the card was a post-it note. I've only pictured a snippet, but man, how powerful is that? The truth is, I feel the same way. Some of my best trading friends have turned out to be from rival teams. Judson is a Rangers fan, the same Rangers that knocked the Yankees out of the 2010 ALCS. And it's not just the Rangers. A few of my favorite traders are fans of the Boston Red Sox. I've found guys like Matt Perry and Mark Hoyle to be some of the best card-collecting dudes out there. 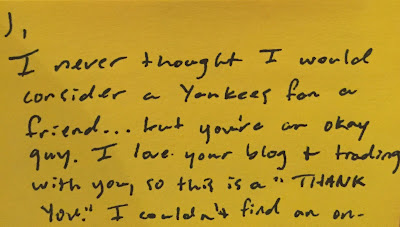 On the flip side, I know Yankee fans are despised all over the country, but hopefully you've been surprised that some of us are a civil bunch, and that your experiences with me, Zippy, Drew, Tim, etc. have made you realize that not all Yankee fans are bad.

Judson, thanks for not only the awesome Gardner auto, but also for being my friend.
Posted by The Lost Collector at 8:11 AM 9 comments:

I know, I know. He's on the Red Sox staff. But to steal the Knicks motto - "once a Yankee, always a Yankee!" Torey Lovullo played 22 games for the 1991 Yankees, and found himself on a couple of cards. I sent these to Mr. Lovullo in early mid-September, and they came back signed yesterday. 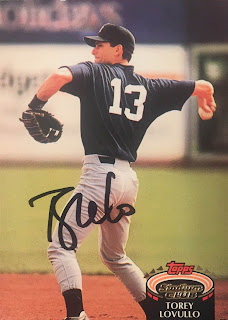 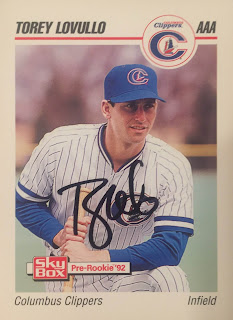 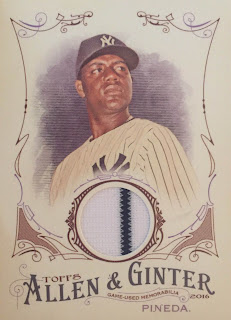 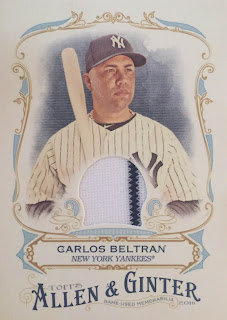 Posted by The Lost Collector at 9:03 AM 4 comments:

I won't lie, I double-dipped on this one. I did receive a Goose Gossage TTM autograph a long time ago. I'm not exactly sure when. I want to say I got it while I was in high school, but can't remember if that's accurate. That card is now a key piece of my Topps Yankees Project.

I figured enough time had passed where I wouldn't feel guilty for sending him another request. I had seen that he was signing without a fee, so I gave it a shot, and in just 21 days this returned: 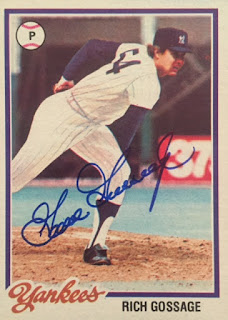 Goose is definitely a cranky old man, but damn, can he sign a card. His signature is a pure treasure.

Thanks for the autograph, Mr. Gossage!
Posted by The Lost Collector at 8:22 AM 4 comments:


No, this is not a political post. I’ll spare you. If you want political posts, just go on your Facebook and read the post of your best friend from fifth grade who you haven’t seen from seventh grade. I’m sure he has some great, unbiased political insights.

This is a post to say how thankful I am for USA baseball, and because of his role on the 1988 squad, Tino Martinez is still included in some newer releases that center around these teams of the past.

I keep waiting for him to make an appearance in Archives or something – it’s not a stretch when you see guys like Bret Boone and Tony Fernandez and even Paul O’Neill included – but alas, each year passes without finding Tino in a current release. However, the non-Topps products have been a bit more generous to him over the past few years. 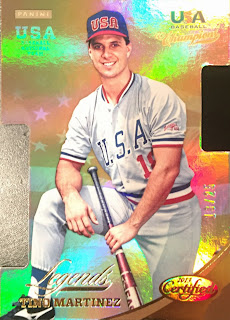 This was a cool set from Panini in 2013 – USA Baseball Champions. This exact card has several color, numbered parallels. This gold #’d/25 popped up for a very affordable BIN on eBay, so I snagged it, not knowing when I’d see it again. I believe all I need now is the Mirror Blue parallel /199, which shouldn’t be too tough.

Hopefully I’ll see Tino in a 2017 product, but until then, I’ve got cards like this to keep the hunt going.
Posted by The Lost Collector at 8:40 AM 3 comments:

SuperTraders #20: The Angels in Order


While it’s been a little hard to keep up, I will say that #SuperTraders has allowed me to trade with some collectors I haven’t traded much with in the past. I had a healthy stack of Angels, so I was happy to send those along to Tom of Angels in Order. Tom also sent me a great batch of Yankees from some sets that I definitely hadn’t seen before, which is always fun. 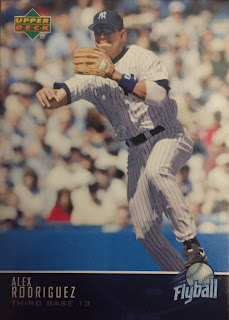 One card of note was from Upper Deck Flyball. I certainly hadn’t heard of this product. Baseballcardpedia tells me it was an interactive set issued in 2005. I was a senior in college then, so I definitely missed a lot of sets around this time.

Here is the back of the card. Do you ever notice how confusing baseball card games seem to be? 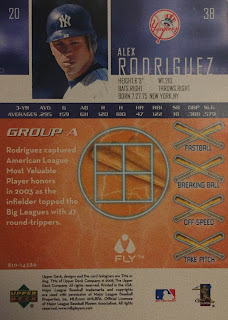 Another set I hadn’t seen were these Toys ‘R’ Us issues. From what I can tell, each card was either a future star, young star, or rookie star. They got Bernie’s right!

Again, an oddball I hadn’t seen, this time from 2001 Topps along with Post cereal. I’m surprised El Duque was included as the Yankees representative in this 18-card set, although I am a big fan of his, so no qualms from me. 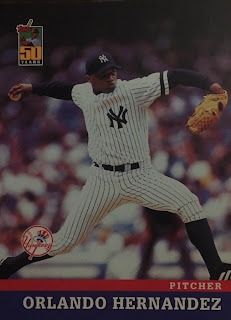 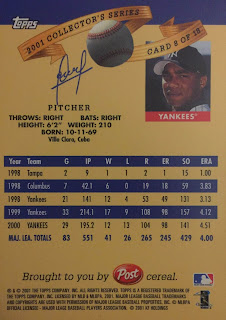 Salt Lake Bees baseball cards! What a cool looking set! I’m not entirely certain why Yankees are featured on this. Does any know? I think they are great, and clearly a promo item. 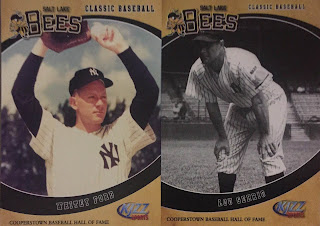 Topps Turkey Red are some of the coolest cards out there. The vintage backgrounds look great. This is actually a shiny, glossy version, which I didn’t know existed. 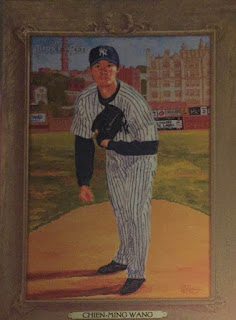 These are so bad they are awesome. Not the card, the photos! Check out the school pictures of these 1991 Yankees draftees. 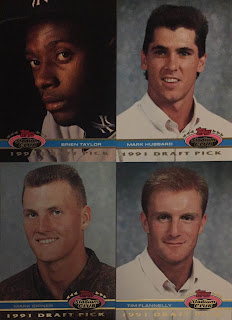 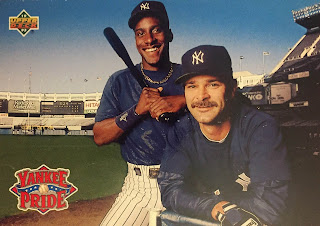 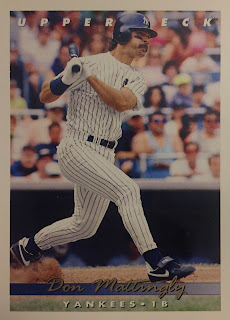 Tom, did you secretly collect Matsui?

I’ll end with a Yankees Wacky card. This one is kind of perfect for me. My name is AJ…apple juice…on a Yankees card? It works! 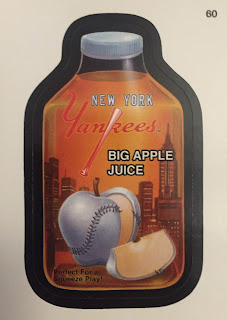 Tom, thanks for a great package!
Posted by The Lost Collector at 10:31 AM 5 comments: 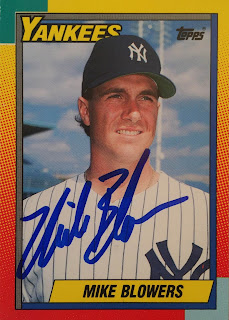 The Yankees and Mariners have traded a lot, it seems. You’ve got modern day deals like Pineda, Ichiro, and Shawn Kelley all coming to NY in various deal, while the Yanks tend to send the M’s some spare parts from time-to-time, such as the recent Ben Gamel trade.

Then you’ve got the greatest deal ever, Tino Martinez and Jeff Nelson for Sterling Hitchcock and Russ Davis. Oh yeah, and there was some guy named Buhner before that.

I’m sure I’m missing a few, but I can easily recall the Yankees and M’s hooking up for trades over the last 30 years far more than I can most other teams, outside of maybe the Pirates taking all of the Yankees catchers.

Here’s one that backfired on the Yankees. It wasn’t franchise-altering or anything, but the Yankees sent a young Mike Blowers to Seattle for Jim Blueberg, a pitching prospect. Blueberg stalled out in AA, while Blowers played for M’s through 1995 (and a few more reunions afterward). He hit 23 HRs for the 1995 Mariners, the team that knocked the Yankees out of the post-season. Fate! 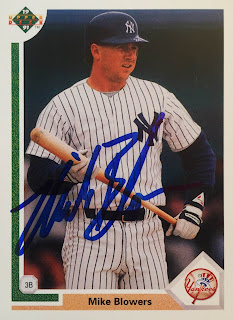 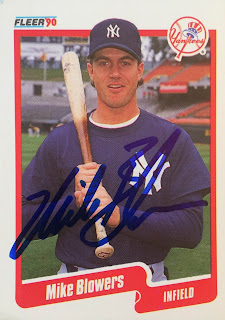 Blowers now works as a broadcaster for the M’s, where he signed three cards for me in about 6 weeks turnaround time.
Posted by The Lost Collector at 11:24 AM 1 comment: