Flying up the rankings 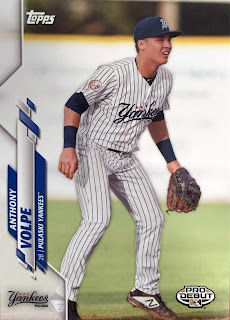 Prospect rankings can often be inconsistent and arbitrary. Many in the Top 100 at any given time won't have an impact in the Major Leagues.
Still, wouldn't you rather your team have a few high-ranking prospects?
The Yankees haven't gotten a ton out of their most recent first round draft picks. Outside of Aaron Judge, many either didn't make it, were traded, or are still finding their way in the minors. There have been short bursts of success, but by and large their picks have underwhelmed over the past decade. That happens when you frequently pick in the late 20s and don't have access to top five talent.
In 2019, the Yankees selected a local product, high school short stop Anthony Volpe from Watchung, NJ. He was committed to Vanderbilt, but the Yanks signed him away. Many felt the pick was fine, maybe a slight reach, and perhaps not the most exciting prospect.
They were wrong.
In 2019, he played in a few games and his season was cut short by mono.
Then 2020 was a throwaway year for lower level minor leaguers.
But in 2021, the Yankees look like they may have struck gold with their 2019 first rounder. Volpe has been nothing short of amazing. In MLB Pipeline's most recent Top 100 mid-season rankings, Volpe comes in at number 15 overall. Even more impressive, he did this from not being ranked at the start of the season. That is a massive jump.
And for good reason.
Just 20 years old, he has played at A and A+ levels this year, hitting .302/.436/.609 with 21 HRs in 90 games. He has swiped 28 bases, and has walked about as much as he has K'd. He's doing all this at shortstop, while be a few years below the average age of his competition.
A lot can happen between A+ and AA and AAA. But for now, it appears the Yankees have something special brewing, and what a story it would be to see a local kid man SS for the Yankees. With all due respect to Andrew Velazquez, of course.
Volpe cards used to be fairly easy to pluck on TCDB, but now not so much. Still, I managed to get quite a few before he burst onto the scene. 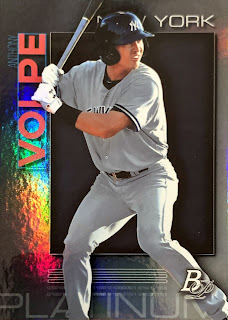 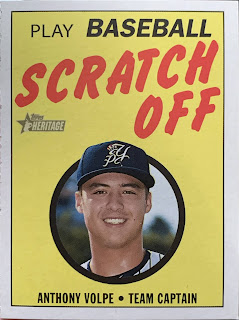 Here's to hoping he continues to flourish and climb the rankings as one of the best prospects in baseball.
Posted by The Lost Collector at 7:00 AM 5 comments:

Yesterday, I received my first Anthony Rizzo card that depicts him as a New York Yankee.
Rizzo is a likable player, and I'm glad the Yankees acquired him. It's been too long since they've had a good power bat from the left side who plays an above average 1B, as well.
The move was sweet because it was unexpected, but also quickly balanced the Yankees lineup with two power lefty bats, since Joey Gallo was also brought on board.
Rizzo quickly endured himself to Yankee fans with a big HR in in his first game, and went on a small tear with RBIs in his first six games with the new squad. While he's struggled a touch since then, plus had a bout with Covid-19, I'm not worried about him in the slightest and think he'll be a really important player down the stretch run. He's settled into the number 2 spot in the lineup. 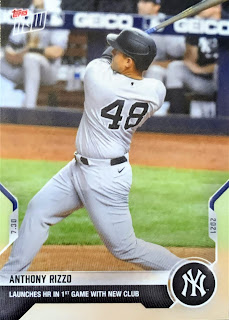 I decided to buy the first Topps NOW card that depicted Rizzo in a Yankees uniform, since I'm not sure how many Yankee cards he'll get. He's a pending free agent (I hope the Yankees re-sign him), and usually trade deadline acquisitions don't make it into Update, which is pretty weird. I'd rather Update print a month later and include the deadline deals versus waiting until Series One.
There was a previous Topps NOW card that featured the "TRADED" mark, but Rizzo was still in a Cubs jersey. That's an overlooked benefit of Topps NOW - being able to acquire cards of guys in new uniforms and not having to wait months.
Sadly, I missed the first Joey Gallo Yankees card, but since he's under contract next year, I'm not too worried about it, and expect him to have 500 Yankee cards next year.
Posted by The Lost Collector at 8:30 AM 4 comments:

I've been going through a busy time at work right.
It doesn't make me different or special. Many of us feel a bit overworked and tired. I'm glad to be working, when I know some aren't that fortunate over the past year and half.
But still, I've found myself to be getting worn out easier, a tad more irritable towards my staff, and wishing the days away. And despite entering our busy season in a couple weeks, I'm set to leave for a week-long beach vacation later today with my wife and kids.
It's coming at a good time, as I plan to recharge my batteries a bit. As parents can attest, a vacation with kids often is not a vacation at all, however, I'll do my best to settle down for a few days without much of an agenda.
So for now, all is well in my world.
And speaking of 'well', Yankees 2020 first rounder Austin Wells is off to a strong pro start, hitting .260/.388/.471 with 10 HRs between two levels of A ball. Wells was one of the better collegiate hitters in the 2020 draft, so it's not surprising to see him doing well, and have the power start to show up. 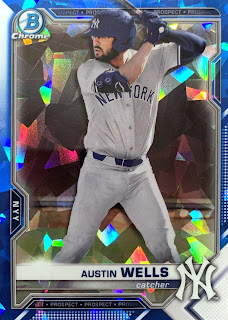 I only have a few cards of him, but this really pretty Bowman Sapphire recently arrived via a TCDB trade, if you're into that sort of thing. While we don't need Sapphire for every single product, it really does look nice and enhance nearly any card design.
Between Wells and 2019 first rounder Anthony Volpe, the Yankees have made what looks to be two really strong picks in a row. People will say it's the hype machine, but these two are very legitimate prospects who are fun to follow.
And with that, I'm off to go sit in traffic on the Garden State Parkway.
Posted by The Lost Collector at 9:13 AM 5 comments:

'On demand' means a lot in today's world.
It's become a part of everyday speech, often referring to some sort of instant gratification. To me, it's mostly commonly associated with television. There's even a button on my TV remote with a star on it, with the button's label reading "On demand."
Baseball cards too are now printed on demand, something that started with Topps Now and has evolved into many, many forms of cards released online and printed to order. There are so many of these types of sets now, that it's impossible to keep up. I rarely know what sort of sets are out there at any given time.
It's easy to not pay attention. I have no need to go Topps' website just to browse around. Every so often I'll open one of their emails and notice a set that's currently available on demand. I might even buy one once in a while, such as Derek Jeter-curated set.
Recently on TCDB, someone offered me two Gleyber Torres cards that were printed on demand. I had no idea either card existed.
The first is a 2020 Topps Attax. I don't think the brand every resonated with baseball collectors. I've gotten tons from 2010ish in trade packages. I see the brand seemingly do well for some other sports, like soccer, but in baseball it never made much of a splash. Still, it's neat to see some of today's current players on an Attax design. 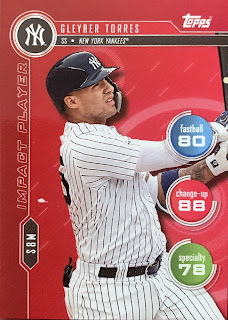 The next was a 52-card set created by Kenny Mayne. I love Kenny Mayne. I know there are a lot of cool people who like to brag about not liking ESPN, but Mayne was one of the best SportsCenter anchors and talents to land on air, and his catch phrases and features were always outstanding. While this looks more like a playing card of course, I didn't know this set was even a thing until the card was proposed to me in a swap. 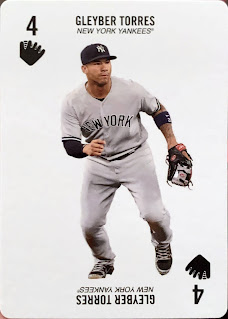 That's all for today. Off to work...where my time is IN demand.
Posted by The Lost Collector at 8:51 AM 4 comments:

In my small corner of the hobby, not much beats a PWE from other bloggers.
I recently received two of them on the same day, which was surprising, as most PWEs nowadays are from the TCDB (a great place to trade if that's your sort of thing). While both appeared out of the blue, neither were necessarily 'just because.'
The first I opened was from Chris at The Collector. He held a PWE swap meet, where I sent him a random batch of basketball cards. In return, he sent me a Yankees themed PWE: 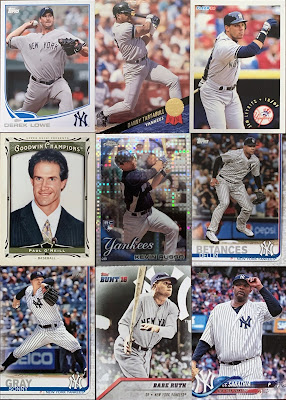 Very nice assortment. Older X-fractors still hold up. I also like the Goodwin Champions of Paul O'Neill and his big head. But my favorite card, not pictured above, was a cloth sticker from 2011 Lineage of A-Rod. Man, I really liked that set. If the cards had stats on the back it could have been an all-timer. 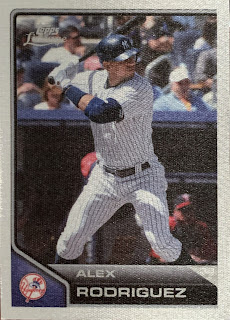 Thanks, Chris! Fun cards.
The other PWE was from Elliptical Man over at View From The Third Floor. I won his NFL Draft contest, and was awarded some auction points. He sent a note saying that he decided against an auction, so sent me a PWE of Yanks. No problem there! 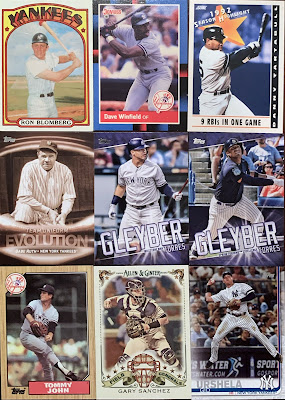 Another really fun batch. A 1972 Topps Ron Blomberg?! Great card from a great set. That one takes the cake for me, although I liked the Gleyber inserts a lot too, as I'm still finishing that set.
Two excellent PWEs from two excellent bloggers. Thanks, guys!
Posted by The Lost Collector at 7:47 AM 6 comments: