After all these years

One fun thing about being an adult with disposable income is picking up cards that I didn't have as a child.
I remember flipping through Beckett or Tuff Stuff and seeing the unattainable cards. They might not have even been that expensive, they just weren't accessible. Not like they are now, where we have a means to pretty much find any card we want. They were from brands that weren't carried at CVS, or from brands that weren't allowed on a budget...like little tiny boxes of Flair.
Another source of card lust was the collections of friends. I remember being at my friend Chris's house, and not only being envious of the dedicated space he had in his room for cards, but he always managed to pull such cool Upper Deck basketball cards. No matter what I offered, I couldn't get him to part with his 1993-94 Upper Deck 3-D Standouts Triple Double Michael Jordan.
The card was so cool. Triple Double in block letters. Jordan shoot a fadeaway off one foot. A hologram. The card had it all.
I know I offered him a lot, but he just always shook his head "no." I don't blame him. 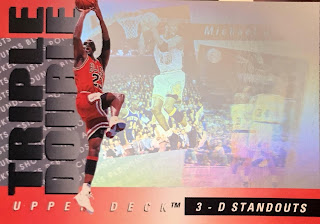 I'm not sure what took so long, but recently the card popped into my head. After a quick eBay search, I found one. I didn't have to got to all ends of the earth. I didn't have to make a financial sacrifice. It was less than $10 all in.
That's part of the fun of collecting as an adult. I've done it numerous times: picked up a card I never could have as a kid. In some instances, it's a big card, like an original Mantle. In others, it's just a good-looking insert card that I could never bring into my collection.
Posted by The Lost Collector at 7:43 AM