Over the past year, Gleyber Torres has not been a good baseball player.
After All-Star seasons in his age 21 and 22 season in which he hit 24 and 38 HRs, respectively, he's struggled a bit. He never looked good in last year's fake season, and he's off to a slow start this year. While that can be said for the entire Yankees team, Gleyber really has not been good.
Just twenty three days into the season, I'm not worried. I think he'll find his stride and hit .250 with 25+ HRs. Fine numbers for a shortstop. But why the sudden struggles after the game looked so easy for him just a few years ago?
One theory is that he was moved over to shortstop, and the defensive pressure of the position is weighing on him. I don't know if that's true. It might be. As a rookie, he was inserted into second base and asked to really be a bat-first player. But since Didi Gregorius left, the keys to the left side of the infield were passed to him. A lot of pressure? Yes. And perhaps it's affecting his offense.
I think he'll be fine. He's too talented not to be. Games are a lot more fun for me to watch when he's a threat at the plate. Right now, he's not scary in the box. He did have a 3-hit game last night after his hustle was called into question the previous night, so perhaps he's on his way to finding his stroke.
I write about Gleyber today because I just received two of his Chrome rookie cards from Shane of @shanekatz73 on Twitter. I sent him a single card of Jazz Chisolm, and he reciprocated with two Gleyber RCs. I felt like I came out a bit too far ahead here. 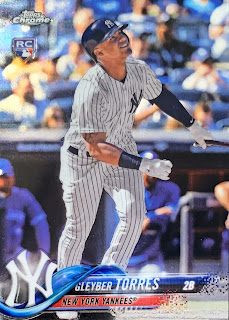 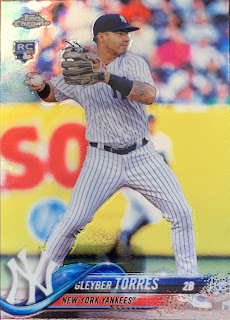 Shane also included a few others, including a nice looking holo from 2020 Donruss. 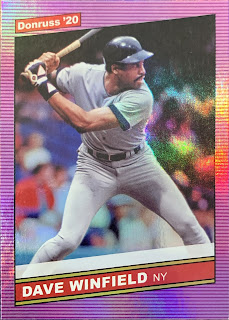 Thanks for the trade, Shane! And hey Gleyber, get it together.
Posted by The Lost Collector at 8:03 AM