What a fancy little holder

Currently, my favorite ad campaign on TV is from Progressive. No, it's not Flo. It's actually Dr. Rick.
Dr. Rick is a coach who helps new homeowners from becoming their parents. Each scene is humorous and relatable, from a parent talking loudly on speaker phone in store, to having too many throw pillows or decorative signs, to hovering over the plumber while he works on a nearby sink.
While slightly fabricated, I think we all have moments where we feel ourselves becoming our parents. For me, lately it's walking upstairs only to find every light on in my house...despite no one being in the upstairs, and grumbling as I turn them off. Or threatening to go into the playroom with a black garbage bag if the toys aren't picked up.
I recently had another moment.
A package arrived from Bru, a long time trading friend and blogger. We completed a small TCDB swap (the best place to trade), and he threw in a nice stack of extras. This was the card on top, which was a Tino I needed: 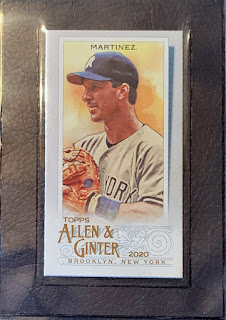 Instead of letting out a "yessssssss" for the Tino card (which was new to my collection), instead I said to myself, "Oh. What a fancy little holder!" That was in response to the penny sleeve that had a built in pouch for a mini card, mitigating the risk of it sliding all around because that's what pesky minis do. 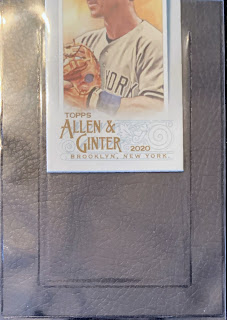 I was more captivated with the actual case than the card. I had never seen one of these. And like a complete geezer I actually said "what a fancy little holder." I didn't call it a penny sleeve. I didn't say anything macho. I called it "fancy." And "little." And "a holder."
I need some Dr. Rick in my life, I think.
I'll get to the rest of the cards Bru sent me another time, but I need to go examine my life for a bit.
Posted by The Lost Collector at 8:14 AM