I had two Tino Martinez cards come in this past week. They couldn't have been more different, yet they shared one common trait.
Gold borders.
The first was was Allan Kaye's Sports Card News and Price Guides. It's uncommon when a Tino from 1992 I hadn't seen pops up, but sure enough, this one did. I was unfamiliar with it, which is definitely surprising since I have a sound grasp on most of Tino's early stuff. But sure enough, I didn't have it, and it was a quick and easy eBay win. 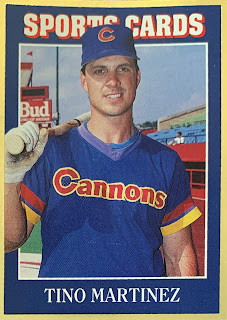 I was surprised to see gold foil borders on this card, as that was still fairly rare for 1992 and generally oddballs were made fairly cheaply. I appreciate the effort, as well as the nice, clean design. 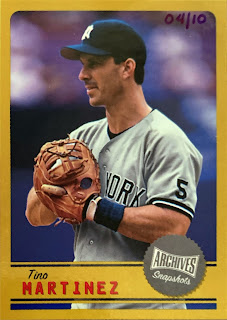 The other was from 2019 Archives Snapshots, a set I have little use for. But when a low-numbered Tino is available, I'll snag it if the price is right. In this instance, the card is hand-numbered 04/10. Weirdly, I also own the gold autograph numbered 04/10.
These two Tino cards put me at 1,099. Just one away from another round number!
Posted by The Lost Collector at 8:11 AM